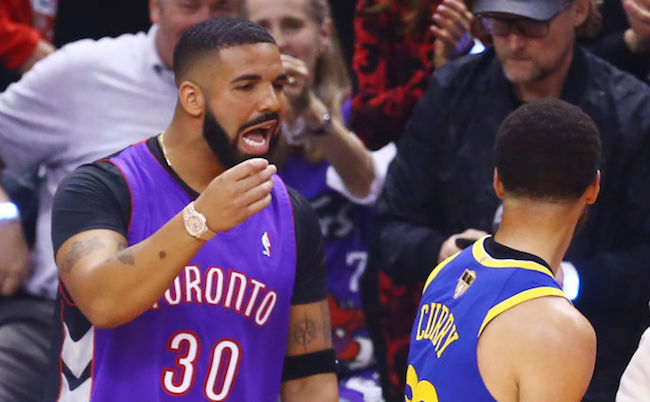 Last week, the Drake Curse officially ended when the Raptors secured their first championship in the history of the franchise against a Warriors team that lost both Kevin Durant and Klay Thompson to devastating injuries.

The rapper was front and center at virtually every game of the NBA Finals and took great pleasure in trolling Golden State throughout the series, as he showed up to the first game rocking a Dell Curry jersey before getting into it with Draymond Green and followed that up by donning a Home Alone-inspired hoodie to mock Durant.

However, Drake was conspicuously absent during the series-clinching game, as he decided to post up on a stage at Jurassic Park outside Scotiabank Arena as opposed to making the trip to Oakland, which seemed pretty odd when you considered he’d been on the sidelines for virtually every game.

DRAKE IS FIRED UP!!!! The Toronto #Raptors are #NBA champions! 🍾 pic.twitter.com/X5CCOAuup1

Now, it appears we finally have an explanation for Drake’s absence thanks to TMZ, as the outlet reported he was apparently asked by the NBA to keep his ass out of the Bay Area due to security reasons.

Their sources say the league was worried Warriors fans who were ticked off by Drake’s antics would lob objects in his general direction and expressed concerns about his safety in addition to spectators who might inadvertently be struck by potential projectiles.

As a result, Drake decided to stay in Toronto. However, that didn’t stop him from hitting up Steph Curry, who had a surprisingly wholesome conversation with the rapper over FaceTime in which he congratulated the superfan for his team’s win.

This wasn’t the first time the NBA reached out to Drake during the playoffs—they reportedly asked him to turn things down a notch or two during the Eastern Conference Finals.

I personally would have said “Fuck that noise” if the NBA asked me to miss out on a chance to see my favorite team win a title in person but props to Drake for making the ultimate sacrifice.