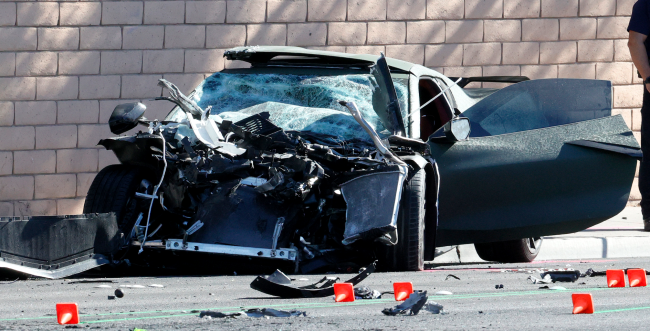 Former Raiders wide receiver Henry Ruggs faces up to 46 years in prison for his part in a deadly DUI crash that killed 23-year-old Tina Tintor and her golden retriever Max.

Ruggs, whose blood alcohol content was more than twice the legal limit, was going 127 MPH in his Corvette when he smashed into the back of Tintor’s Toyota RAV4 last November, sending it 600 feet down the street and bursting into flames.

A witness to the crash, 47-year-old Tony Rodriguez, was one of the people who attempted to rescue Tina Tintor from her burning vehicle.

He recently spoke about it to Sports Illustrated contributor Jeff Pearlman.

Rodriguez, homeless and addicted to heroin, was driving in his unregistered GMC truck with a friend named Johnny Ellis on his way to go steal some scrap metal to sell when he encountered the horrific crash scene.

He parked his truck in the middle of the street and heard Ruggs’ girlfriend Kiara Kilgo-Washington screaming.

As Rodriguez sprinted toward her, he says he saw a young-looking Black man in a black sweatshirt, his lower body still planted inside the car but his torso dangling on the road. “I was about to tell her not to move him, but it was too late—she grabbed him and pulled him fully out,” Rodriguez says. “I have no idea who he is. I don’t care about football. Never heard of Henry Ruggs. But I didn’t see no life in his body. I thought he was dead.”

Rodriguez and Ellis ran next for Tintor’s RAV4, which by then was engulfed in flames. All four windows were closed and the doors were locked. Ellis dashed back to the truck and returned with a hammer. He smashed in the passenger-side window, and when he found no one inside he flipped the tool to Rodriguez, who was kneeling by the driver.

“Nothing was working. I started on the door, fighting to open it. To get this person out somehow,” he said.

A security guard from a nearby business joined him in trying to free Tintor, but soon gave up. Eventually, after hearing his friend shout, “Tony! There’s nothing we can do!” he finally walked away.

On the darkest of days, Rodriguez replays the entire tragedy. Did he do enough? Could he have saved Tintor? There was another tool in his truck, alongside the hammer—a pipe bar, used for digging. “I bet I could have jammed open the door with it,” he says. “Why didn’t I?” Sitting in a coffee shop, he can still see the flames and feel the heat. He hears the tires popping. His hand is touching Tina Tintor’s arm. He is back there. Always back there.

Read the entire tragic story over at SI.com.