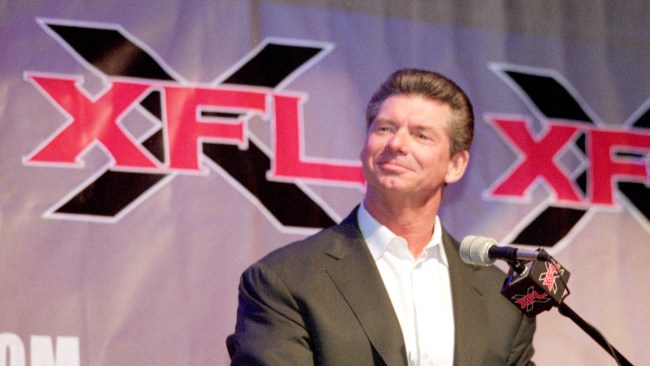 The Alliance of American Football didn’t do the re-booted XFL many favors when it imploded after just eight weeks of play. Sure, now the XFL has one less competitor to deal with when the league launches again in 2020, but the spectacular disaster that the AAF ended up being might make both players as well as fans a little reticent to care about yet another new football league.

That being said, the XFL is still going full steam ahead with their plan and part of their plan is to try and differentiate itself from the NFL by making some rule changes to the game.

XFL commissioner Oliver Luck has already revealed that the league will utilize one, two, and three-point conversions, and now he has confirmed that the XFL may be making another pretty radical rule change.

XFL Commissioner Oliver Luck said on the #PFTPM podcast in April that the league was considering allowing multiple forward passes on one play, and at the league’s player tryout in Tampa over the weekend, Luck confirmed that’s in the works, although the XFL’s rule book has not been finalized. Luck, a former NFL quarterback himself, said the idea is that the quarterback might throw a pass to a wide receiver along the sideline, who could then throw his own pass downfield.

“If I’m in the shotgun as a quarterback, I’m five yards back, I can’t throw a lateral to a receiver because he’d have to be seven yards back,” Luck told the Tampa Bay Times. “You might as well hold a sign, ‘We’re going to throw a trick play right now.’ So we said, all right, if a team’s in the shotgun, that shouldn’t prevent the double forward pass.”

“You can put your backup quarterback in there [at wide receiver]. You can sneak him in the game. Let him rip one down the field,” added Luck.

Speaking of quarterbacks, Luck, who played QB for the Houston Oilers from 1982 to 1986 (and is Colts star Andrew Luck’s dad), also recently told Greg Auman of TheAthletic.com that the XFL has its eyes firmly focused on the Seattle Seahawks’ backup quarterback competition involving Geno Smith and Paxton Lynch.

“We’re watching the backup quarterback camp battles,” Luck said. “One of these guys is going to get cut. There’s a bunch of those going on. We might not get all of those guys, the quote-unquote loser of those, but a Geno or Paxton is not going to end up on a practice squad. There are a bunch of 3-4-5-year guys that are in that boat. They’ve been on rosters, practice squad, been yo-yo’d two years. They need to play, and that’s my argument to them, that it’s very doable here.”

Luck was the athletic director at West Virginia when Smith played there so he is rather familiar with the former Jets quarterback. Throw him in the mix for a starting job on one of the XFL’s eight teams with Johnny Manziel and uh, Landry Jones, and they’re almost halfway there!