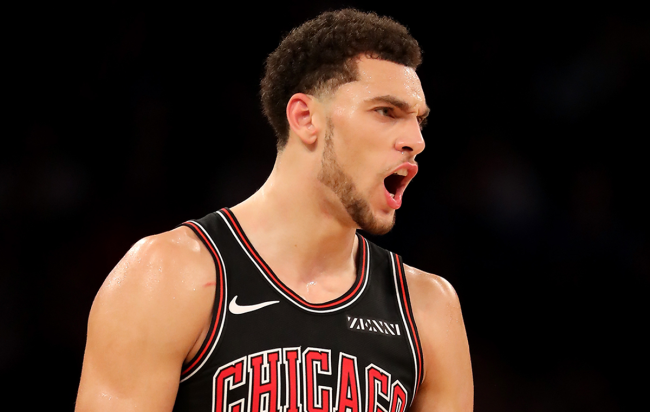 I never thought I’d miss being able to drop $16 on a Miller Lite at a sporting event, but I am eagerly awaiting the day I get the chance to do exactly that as soon as more teams decide it’s safe for fans to make their way back into stadiums and arenas.

There are plenty of reasons to be bummed about not being able to attend a game in-person, as there’s nothing like becoming temporary friends with some people in your section while soaking in the electric atmosphere and gaining a deeper appreciation for whatever sport you’re watching by seeing some of the most insanely talented athletes in the world do their thing without having to use a screen as a conduit.

As someone who clocks in at the 6’10” mark, I’ll never forget what it was like to attend my first NBA game and feel like I’d finally found my people, as you don’t really understand just how massive most players are until you encounter them in their natural environment. This includes guys who are frequently described as “small” despite towering over the majority of the general population, like Zach LaVine, who “only” stands at 6’6″.

During Wednesday night’s game against the Pistons, Zach LaVine found himself beefing with Josh Jackson in the closing minutes of the third quarter, and while Jackson has two inches and a few pounds on the Bulls guard, LaVine did not back down during a scuffle that saw the two men exchange pleasantries and ended with each of them getting hit with a technical foul for their troubles.

LaVine and Josh Jackson getting into it 👀 pic.twitter.com/1ZNQmhMzPT

After the game, LaVine shared his thoughts on the fracas that led to him sporting a noticeable scratch on his neck and said that he wasn’t intimidated by Jackson, clarifying there are only two people he’s scared of: God and his dad.

After Zach LaVine got into a scuffle with Josh Jackson last night, he explained why he didn't back down. pic.twitter.com/IUDB4dwF9I

Based on what I know about the Old Testament, it’s generally a bad idea to piss off God, but it’s easy to see why LaVine would also want to stay on the good side of his father Paul, a former NFL player who stands at a relatively paltry 6’2″ but who is still an absolute unit despite being in his late 50s.

While I think most guys will always be slightly terrified of their dad no matter how big they are, it’s easy to understand why LaVine it’s particularly cautious when it comes to crossing his.