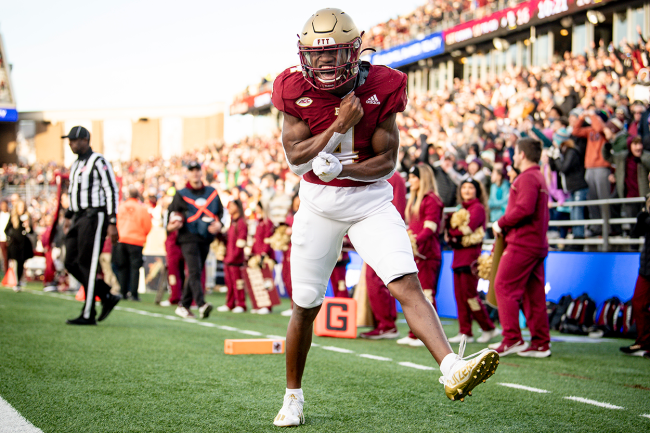 Boston College wide receiver Zay Flowers turned down a lot of money to stay with the Eagles this fall. He recently revealed exactly how much money he was offered and why he decided not to transfer.

As Boston College gears up for 2022, there is a sense of optimism around the team that head coach Jeff Hafley has assembled in Chestnut Hill. A large part of that hope stems from the offense.

Veteran quarterback Phil Jurkovec is back at full health this year and is flying incredibly under the radar as a signal-caller. Some NFL Draft analysts think that he could even play himself into being one of the top-five quarterbacks in this year’s class.

Jurkovec’s primary target this fall will be Flowers. The 5-foot-11, 177-pound senior has averaged more than 15 yards per catch in each of his three years at B.C., and caught 100 passes for 1,638 and 14 touchdowns over the last two seasons.

Flowers is the most electric receiver to play for the Eagles in a very, very long time— if not ever. But an alternate reality exists where he did not return to Boston College in 2022.

There was buzz around Flowers entering the NFL Draft, but he ultimately chose to finish out his degree and try and improve his stock now that Jurkovec is back to 100%. In addition, he chose not to transfer.

In the current age of NIL and the transfer portal, top players at “smaller” programs are being lured into transferring with big financial packages. Flowers was among them.

Earlier this offseason, the Florida-native revealed that he turned down two offers. Both offers were in the six-figure range. He chose not to accept either NIL package and did not transfer.

At ACC Media Days on Wednesday, Flowers revealed exactly how much money he was offered to transfer. One program (through its boosters) said that it would pay him $600,000 to play football at their school this fall. He only has one year of eligibility remaining, so Flowers literally could not stay longer than one school year.

In addition, Flowers explained why it was an easy decision to stay at Boston College.

Star WR @ZayFlowers says turning down 600K to transfer away from Boston College for his senior year was not a tough decision. pic.twitter.com/7MfwLNbifE

Ultimately, Flowers’ decision did not go without some form of compensation. Although B.C.-affiliated boosters and businesses may not have been able to meet the $600,000 offer, he will be driving a $90,000 car this fall through NIL.