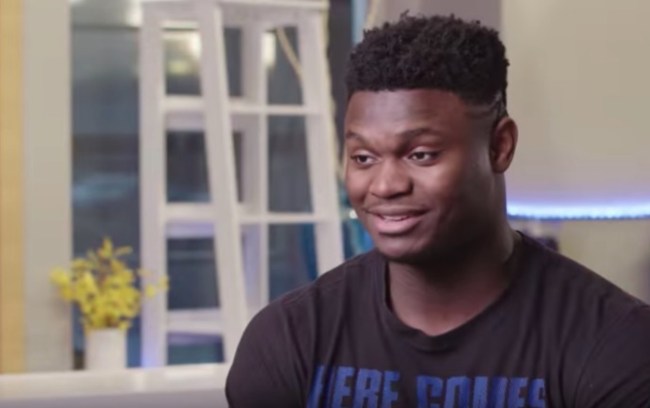 Duke Men’s Basketball is the #1 overall seed in the 2019 NCAA Tournament and they’ve got Zion Williamson, the nation’s unanimous #1 player, leading the charge towards cutting down the nets.

Zion is assuredly the future #1 overall pick in the NBA Draft. Barring an injury, he’s going to have an incredibly successful career in the NBA and get PAID immediately. He’s about to leave college after the NCAA Tournament and play alongside his idols.

But who are the 18-year-old’s idols? It’d be easy to assume that the person he looks up to the most in the world is LeBron James but that’s not the case. Zion’s stepdad would often talk about how Michael Jordan was the G.O.A.T. and thanks to the modern wonder that is YouTube, Zion has been able to spend an unimaginable amount of time watching old Jordan footage so he can emulate the great one.

In this clip from GQ, Duke Basketball players all talk about how they think the greatest NBA players are and which ones are their favorites. Given that many of these guys have future homes in the NBA it’s interesting to see their answers:

I’ll be honest, my bracket has UNC and Duke meeting again this season in the NCAA Tournament finals. I didn’t set out to fill my bracket that way but as I was going through all of the matchups I just couldn’t foresee a scenario where either of those two teams lose.

On a normal year, I wouldn’t be super excited about a Duke-UNC finals when they’ve already met several times throughout the season but with Zion playing his final college games I think it sets up an incredible finale to the Duke-UNC rivalry. What about you bros, would you be disappointed to see those finals this year? Who do you aave winning it all?