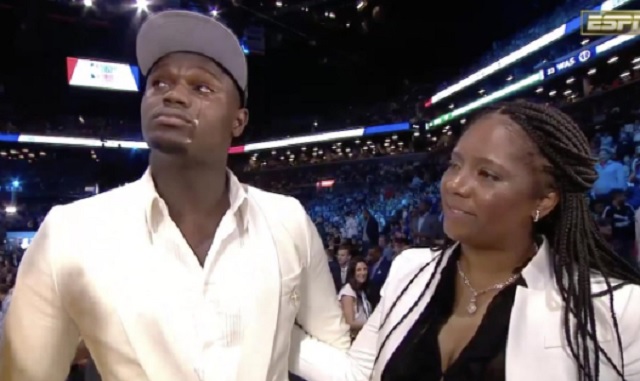 Zion Williamson is the most-hyped NBA rookie since LeBron James in 2003, with the No. 1 overall pick in this year’s class expected to take over the league and transform the entire sport. No pressure or anything, right? While there are tons of believers who are fully aboard the Zion train, naturally, there are some haters who aren’t totally convinced he’ll become the superstar many think.

One of those people? Portland Trail Blazers big man Enes Kanter, who discussed exactly who Zion Williamson reminds him of while appearing as a guest on The Herd with Colin Cowherd; Julius Randle, with hops. Take a look at Kanter explaining his opinion to Cowherd, which seems a bit off.

No disrespect to Randle or anything, but Zion Williamson is an absolute freak athlete who has proven to be more than just a dunker. He can defend. He can shoot. He has insane court vision. Kanter — who’s known for being a mega troll at times — can have his opinion, but he might have just given Zion more of a reason to posterize his ass this upcoming season.

Hell, even the guy who Enes Kanter compared Williamson to, Randle, seemed to come to the defense of the soon-to-be rookie; while poking fun at Kanter and his, uh, lack of defensive ability.

If Kanter’s right in his assessment about Zion Williamson and he is, in fact, just Randle with hops, the Blazers big man might want to tighten up while trying to defend the phenom, because Randle did Kanter dirty on the court during their last meeting.

Of course, considering the Internet loves Zion and thinks he’ll become a superstar, Twitter found Kanter’s comments to be quite hilarious. Take a look at what people were tweeting in reply to his comments.

Zion waiting on the opportunity to meet Enes Kanter at the rim. Lol. #zionwilliamson pic.twitter.com/W7UQuI865G

Enes kanter is so embarrassing lol

Who’s man is this??? He must be blind. The kid is unbelievable! Kanter needs to focus on how to better his game 👀👀. pic.twitter.com/K6DChfyPqW

No player is a lock to become a superstar, but Zion Williamson looks like the real deal. He’s got a lot of weight on his shoulders to live up to that type of hype and some of the comparisons being thrown his way, but one that doesn’t seem to fit is Kanter’s Julius Randle one, so we’ll have to see if Williamson tries embarrassing him on the floor next season after hearing this.