Zion Williamson’s HS Coach Describes How Freakishly Athletic The Potential No. 1 Pick Is In Other Sports, Too 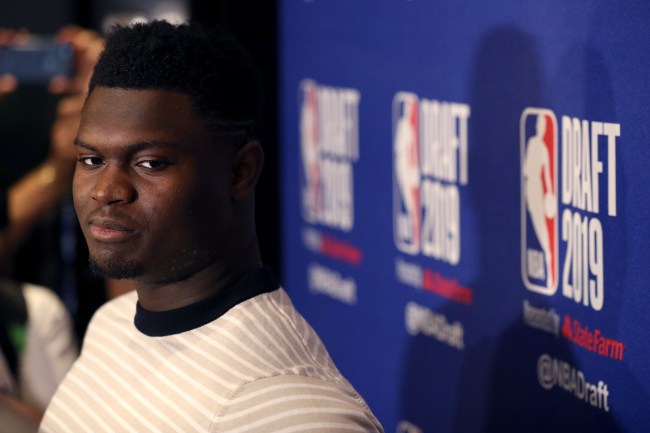 Zion Williamson’s set to become the No. 1 overall pick in tonight’s NBA Draft by the New Orleans Pelicans. While the former Duke star has flashed freakish athleticism on the basketball court to get him in position to be taken first overall, apparently, Zion isn’t only dominant on the hardwood, because he’s better than a ton of people at most sports, too.

That’s according to Zion Williamson’s high school basketball coach, Lee Sartor, who coached Williamson at Spartanburg Day School in South Carolina. Sartor, in a video on TMZ Sports, described some of the other incredible feats that Zion showed off while in high school, which included hitting a 400-foot homer on the baseball diamond and throwing a football 70 yards out on the football field.

“I also witnessed him hit a baseball over 400 feet. … He was just messing around on the baseball field, and he said, ‘Let me hit one.’ And he hit the thing over the fence about 400 feet.”

Uh, so that’s pretty F’in incredible. Not sure there are too many human beings out there who can just “mess around” and blast a 400-foot dong over the outfield fence. Well, unless you’re a superhuman like Zion Williamson is. Take a look at the video from Sartor below.

Zion’s coach also talked about the viral video from 2017 that showed the potential No. 1 pick heaving a football 70 yards. To refresh your memory, take a look at Williamson’s arm strength — which rivals some quarterbacks in the college and pro game.

Guys, how the hell is that even possible? First off, the football looked like a tennis ball in his hands. Second, the damn thing just didn’t seem to stop, as it just kept soaring through the air as if the entire thing was CGI or something? Clearly the kid ate his Wheaties growing up, because he’s as strong as an ox.

While coaches in other sports have joked about wanting Zion Williamson to play on their teams — like national championship college football coach Dabo Swinney — he’s best suited to rip down hoops on the basketball court. And everyone in the NBA should be prepared, because the wrath of Zion is about to hit the league in a big way.