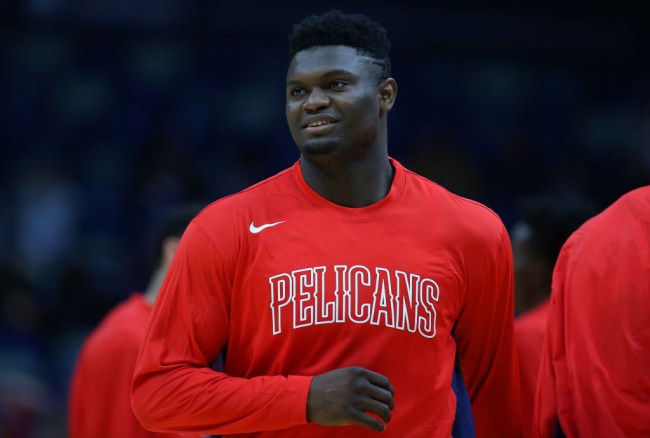 The Pelicans tipped off their season in Toronto against the Raptors on Tuesday night without Zion Williamson. This year’s No. 1 draft pick recently underwent knee surgery to repair a torn right meniscus and is expected to miss between six to eight weeks.

Williamson has suffered three known knee injuries since blowing out his shoe at Duke and now his playing weight has entered the conversation as a reason behind his injury woes. There has even been a report of Nike being concerned about his weight.

He is listed as 6-foot-6, 284 pounds and is officially the heaviest non-center in the entire league.

While the Pelicans don’t see his playing weight as an issue, NBA legends Charles Barkley and Reggie Miller have different opinions.

Miller talked with Dan Patrick on Tuesday and suggested that Williamson was around 25 pounds overweight. According to the standard body mass index table, a 6-foot-6 person at 284 pounds has a BMI of 32.8 which is considered obese.

While Miller’s input is, of course, valuable, perhaps nobody has a better understanding of the situation than Barkley who played at 300 pounds at Auburn. Barkley eventually trimmed down to 250 pounds and played 16 seasons in the NBA. He gave his opinion during TNT’s pregame show on Tuesday.

“I don’t think he can play at that weight long, extended periods of time at 285. I just don’t believe that. I don’t know what his perfect weight is, but he’s going to have to bring in some professionals, get weighed. He needs to get a personal trainer to say what’s the optimal weight for him, because he doesn’t look fat at all.”

"I don't think he can play at that weight"

The difficult thing here is that Williamson can’t really shed weight, at least not the kind of weight he’d want to shed while recovering from his latest knee surgery.

It will be interesting to see, say in 3-4 months, what Williamson’s weight is. It’s a tough situation for everyone involved; Zion, the Pelicans, the league and every fan that loves to watch the big man fly.