Zlatan Denies Making Racist Remarks As Only He Can, Dunks On Romelu Lukaku In The Process 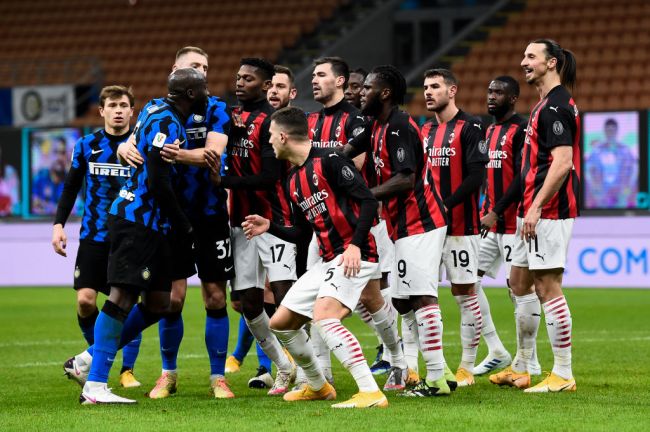 Yesterday, the quarterfinals of the Coppa Italia doubled as a Milan Derby, as historic rivals AC Milan and Inter Milan went head-to-head for the right to advance to the semifinals. The passions in the Milan Derby runs deep: imagine if the Yankees and the Red Sox occupied the same city. The intensity of the rivalry boiled over into the game, as an ugly scene unfolded between Swedish striker Zlatan Ibrahimovic (who opened the scoring in the 31st minute) and Belgian forward Romelu Lukaku (who later converted an equalizing penalty in the 71st minute before former Tottenham midfield Christian Eriksen won the game for Inter in extra time). In case you missed any of this madness, here’s a recap:

Zlatan and Lukaku start going at it before halftime, insulting each other’s wife and mothers (44′)

Zlatan and Lukaku are going at it 😳 pic.twitter.com/yMLFI72tiz

Zlatan gets sent off following his second yellow card (57′)

ZLATAN IS SENT OFF IN THE MILAN DERBY 😳 pic.twitter.com/CI9weSl1II

Lukaku ties the match with a penalty (71′)

Christian Eriksen wins the game for Inter with a brilliant free kick 🎯 pic.twitter.com/W0PrSdZLJ7

So, yeah, you get the picture, this game was insane. Obviously, though, the story didn’t end there: some have since accused Ibramhimovic of making racist remarks to Lukaku, as he can be heard telling him to “do your voodoo shit.”

Zlatan has since come out and denied making any racist remarks as only he can, figuring out a way to further dunk on Lukaku in the process:

In ZLATAN’s world there is no place for RACISM.
We are all the same race – we are all equal !!
We are all PLAYERS some better then others.https://t.co/DhguHUOFte

French international and global superstar Paul Pogba —  who has played with both Zlatan and Lukaku while they were at Manchester United — has since come out and defended Zlatan, saying he’s the last person he’d consider to be racist.

Zlatan… racist? 🤨 He loves me too much so he's the last person I'd think of as racist! Come on, don't joke with that one! 🤣

But, what did Zlatan mean by the “voodoo” comment if it wasn’t racist? Well, back in 2018, Everton major shareholder Farhad Moshiri claimed that Lukaku turned down a new contract at the club after receiving “voodoo message.”

“We offered him a better deal than Chelsea and his agent came to Finch Farm to sign the contract,” said Moshiri three years ago. Robert [Elstone, Everton’s chief executive] was there, everything was in place, there were a few reporters outside, then in the meeting Rom called his mother. He said he was on a pilgrimage in Africa or somewhere and he had a voodoo and he got the message that he needs to go to Chelsea,” Moshiri said.

Lukaku would later deny this story and threatened to sue Moshiri for making such a statement.

The bottom line is this: tempers flared and emotion boiled over, which is something that happens quite frequently in organized sports, especially in the Milan Derby. Zlatan’s been a professional footballer for about two decades now and has never been accused of racism before, so it doesn’t seem likely he’d unleash such vitriol now.

AC Milan and Inter Milan will strap up the boots once again when they face off in Serie A play on February 21, which you just know is going to be must-watch.