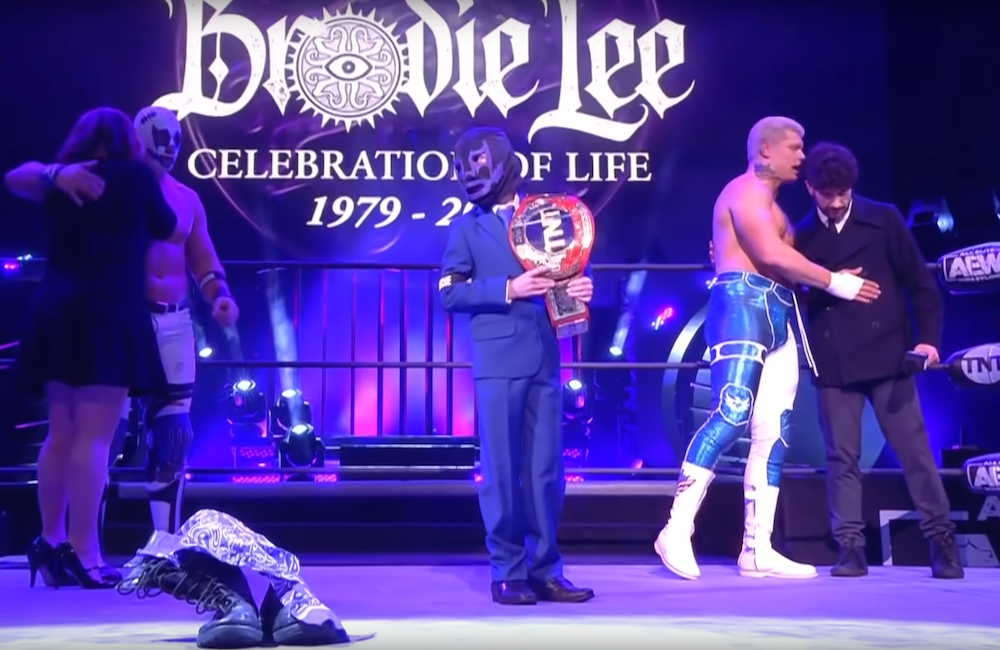 Nicknamed Negative One after officially being added to the AEW roster, a Dark Order mask covers Lee Jr’s face, showing his allegiance to the brood of misfits led by his late father.

The mask is doing its best to hide both the absolute exuberance of a young boy watching his heroes battle their enemies while occasionally masking the moments when the child processes this is all happening because his real-life hero – his father Brodie Lee – has gone to the other side.

The entire episode of AEW Dynamite is every adolescent wrestling fan’s fever dream. Millions of kids have sat ringside and wished just one of their heroes would acknowledge them during a match.

Brodie Lee Jr. was recognized by every wrestler who stepped foot in the ring.

The AEW tribute to the life and career of Brodie Lee was an emotional roller coaster for viewers.

The matches were exceptional – especially given the magnitude of the situation – and the confessional-style interviews with Brodie’s friends on the roster were somber but necessary.

Filming these segments was astoundingly more difficult than any moonsault or topé suicida.

Darby Allin, Wardlow, Colt Cabana, Chris Jericho, one by one, paid their respects to the man behind the “Exalted One” gimmick, each on the verge of tears with every word of praise and memory recall.

Even the typically unflappable Eddie Kingston visibly broke down while paying last respects in a pre-recording interview and during a live promo in the ring.

Thankfully, a few moments of comic relief were sprinkling into the show. On commentary, Chris Jericho provided an occasional one-liner to lighten the mood.

Maxwell Jacob Friedman taking a kendo stick to the head at the hands of Negative One is a top 5 moment of the year. MJF’s reaction on Twitter to the kendo attack as only he can.

Orange Cassidy’s limp-handed fist touch with his number one fan – Brodie Lee Jr. – is both heartwarming and heartbreaking, and the acid wash jeans-wearing idol putting up a half-hearted Dark Order claw for the Exalted One post-match is hilarious.

The evening’s final bout on a card booked by Brodie Lee Jr. saw his three favorite wrestlers – Cody Rhodes, Orange Cassidy, and Number 10 of the Dark Order against Team Taz. Rhodes, Cassidy, and 10 triumphs but soon find themselves outnumbered in the ring.

Before Team Taz can pounce, Darby Allin and Sting appear to make the save.

The show ends with Brodie Lee Jr. and his mother, Amanda Huber, being called to the ring.

Negative One puts his father’s boots, and signature bandana in the middle of the ring while AEW owner Tony Kahn presents the 8-year-old with the TNT Championship declaring the young boy the final champion.

The show’s closing moments include a video package of Jon Huber in the ring and photos of better times with friends, family, and even performers in other promotions.

The song playing over the photos is “Ol’ 55” by Tom Waits. Kahn bought the rights to the music in perpetuity to allow the video to remain up indefinitely. That gesture shows just how much Lee meant to his family in AEW.

I remember the night Owen Hart died. I watched the show that night, and the moment didn’t seem real because nothing in wrestling ever truly felt real.

I remember the Eddie Guerrero tribute show on “Raw” because of the wrestler’s raw and emotional reactions to his shocking death right on camera.

Owen Hart died when I was 22. I was 28 and 30 when Guerrero and Benoit passed. All of those tribute shows were tough to stomach, but none of the three deaths hit me as hard as the Brodie Lee tribute last night.

The overwhelming emotions are likely connected to my job. While interviewing these performers for the podcast, I get to know the real person behind the character in the ring, even if the talks only last an hour.

Cody Rhodes prepared a list of Zelda topics to talk about during our interview because he loves the game. Matt Cardona was in the middle of a rare figure purchase during our discussion and his passion for toy collecting is ridiculously obvious. Shane Taylor and I discussed his rough upbringing and having to fight daily in the streets – roughly around the same age as Brodie Lee Jr. – just to survive.

And for about thirty seconds before hitting record, I talked to Maxwell and not MJF.

I see my son in Brodie Lee Jr.

During the entire 2-hour show, I wanted to grab the kid, hold him, lie to him, and tell him everything will be fine.

Because that’s what parents do. We make our kids feel better by lying to them about life.

Fathers and mothers want to protect their kids from pain, heartbreak, sadness, and death even though we’re all painfully aware those outcomes are inevitable.

Brodie Lee Jr. now has an entire locker room that will grab him, hold him, and lie to him long enough for the pain to subside and life to return to a new normal.