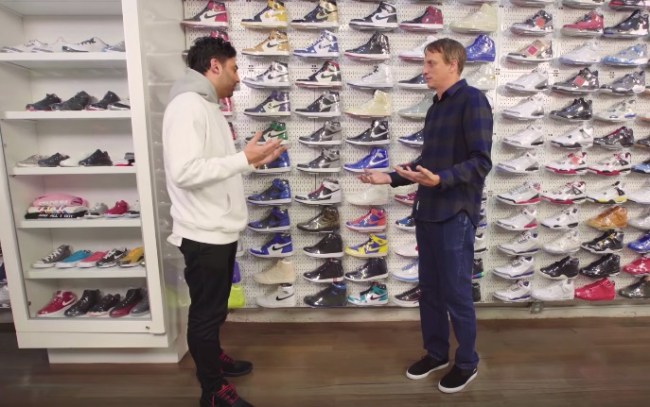 It’s impossible to overstate Tony Hawk‘s impact on skateboarding. He was the first skater to land a 900 in competition (documented) and I still remember where I was when he did it live on ESPN in the 1999 X Games.

His skateboard company, Birdhouse, is responsible for making some of the most iconic skateboards ever built. And there’s, of course, the Tony Hawk Pro Skater videogame franchise that spawned 19 games from Activision between 1999 and 2015 which sold millions and millions of copies worldwide.

Joe La Puma from Complex was lucky enough to go sneaker shopping with Tony Hawk at NYC’s Stadium Goods in SoHo on Howard St. between Mercer and Broadway, a spot that’s just a few blocks away from the old BroBible offices. Tony talks about skating in the Air Jordan 1s, the cultural impact of Vans, and more.

As much as I enjoy these ‘Sneaker Shopping‘ videos from Complex where we get to see cool personalities talk about their personal street styles, the actual premise of these videos pisses me off. The idea that Tony Hawk is at some random shoe shop in SoHo spending his own money on sneakers is insane. There’s no way he’s purchased shoes in the past decade and the same goes with 99% of the people who have appeared in these videos.

You’ve got people like WWE Champ Nikki Bella, NBA’s J.R. Smith, NFL’s Antonio Brown, and worldwide soccer superstar Cristiano Ronaldo appearing in these videos. There’s NO CHANCE they walked out of these stores with new shoes that they paid for. Why even bother always putting in that final scene where they’re handing their credit card to an employee for the shoes? Why???