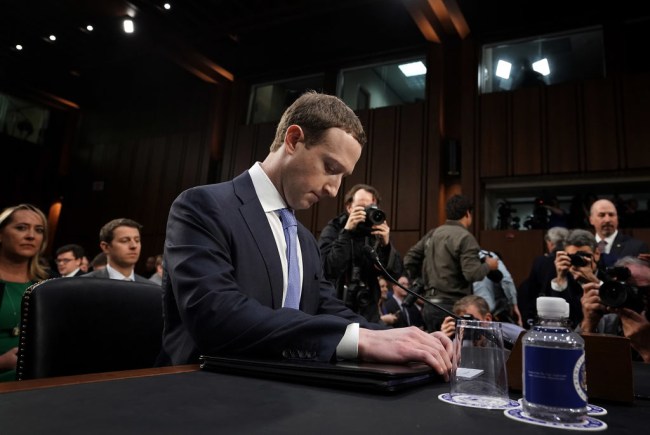 Mark Zuckerberg’s net worth plummeted by nearly $9 billion in 2018. But before you start passing around a donation plate or create a GoFundMe for the Facebook CEO, you should know that he still made the Forbes Richest People in the World list.

Many would say that Facebook had a disastrous year in 2018. The tumultuous year was punctuated by the Cambridge Analytica scandal, privacy issues, major changes to Facebook’s news feed, several top executives leaving the company, numerous significant security breaches, Facebook COO Sheryl Sandberg testifying before Congress, and Zuckerberg’s Senate hearing. Last year, shares of the social network were down by almost 40 percent. That walloped Zuckerberg right in his wallet.

Despite losing nearly $9 billion, Zuckerberg still has an inconceivable net worth of $62.3 billion. That remarkable figure is still high enough to put him at number eight on Forbes’ Richest People in the World list for 2019, but he did drop three spots from the year before when his net worth was $71 billion. Much has to do with Facebook’s stocks since Zuckerberg owns 17 percent of the company’s shares.

RELATED: Couple Explain How They Made $30,000 Reselling Trader Joe’s Everything But The Bagel Seasoning

They are all chasing Jeff Bezos, who is the wealthiest person in the world with a net worth of $131 billion. Thanks to Amazon having another prolific year, Jeff’s worth rose $19 billion in 2018. Bezos owns 16 percent of Amazon’s stocks.

RELATED: Bill Gates Revealed His Best Metric For Measuring Success, And He Learned It From Warren Buffett

Rounding out the top three is 88-year-old investment wizard Warren Buffett with a worth of $82.5 billion, which dropped by $1.5 billion. The top three of Bezos, Gates, and Warren, who were in the same 1-3 spots in last year’s list.

Another blow to Zuckerberg is that he was ousted as the youngest-ever self-made billionaire after Kylie Jenner dethroned him this week. Zuckerberg made his billion dollars when he was only 23-years-old, but Jenner is only 21 and a billionaire. The Kardashian sister’s company, Kylie Cosmetics, is worth $900 million. Let that sink in.

RELATED: Facebook Is The Least-Trusted Tech Company By An Obscene Amount

Americans dominated the list with 14 of the top 20 billionaires from the United States, including three members of the Walton family from Walmart.

You can see the entire Richest People in the World list over at Forbes. You can see last year’s list HERE.