For most of us not sucking on the sagging tit of the American welfare system, work is just one of those necessary evils we must endure just to pay the shit stack of bills that keeps coming around at the first of every month.

There is rent, electricity, internet, child support, car payments, insurance, and food. By the time it is all said and done, we just hope like hell there are a few pennies left over for beer and weed.

So we bust our tails no less than 40 hours per week, trying to put enough money in our pockets to keep the machine that is our lives flowing smoothly enough to keep from being tossed out into the street.

Because no matter how much work can suck at times, it still isn’t as bad as living under a bridge where the only worldly possession left to our names is a cardboard sign that reads “will work for Mad Dog 20/20.”

This means getting up every morning and slaving it out for some faceless goon in exchange for the almighty dollar.

The good news is our bills are paid for the most part, but on the flipside, our health is deteriorating, and we’re just one bad day from a nervous breakdown.

The situation surrounding the mental health of the workforce is so dire, in fact, that a new study finds that most of us could never afford to maintain a work schedule that allows us to be healthy.

Researchers at the University of Cambridge and the University of Salford have identified the optimal work schedule for preventing people from suffering workplace burnout and enduring a complete mental collapse at some point in their career.

It seems that none of us should be out there punching a clock any more than one 8-hour day a week.

No, that’s not a typo: They don’t want us working more than 8 hours a week!

Spending this little time at work, researchers assert, is a good thing, as it provides us with a sense of worth and even boosts our self-esteem.

But beyond that, we are only putting ourselves on the path to a savage mental decline.

This can result in job dissatisfaction, quality issues, and increased stress – none of which is good for the workers or the companies that sign their checks. 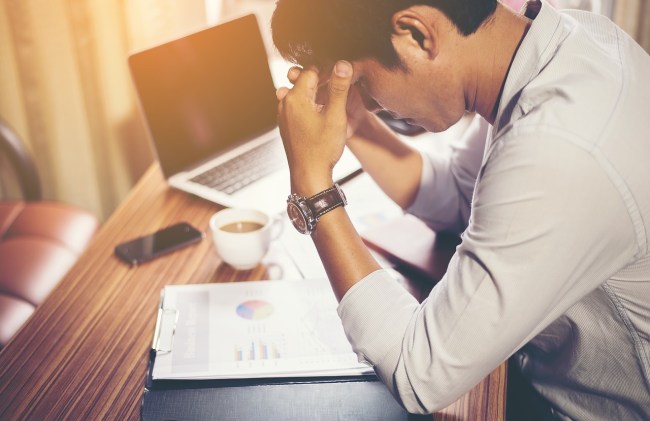 Overall, researchers found that people who work 40-plus hours per week experienced a 30 percent decline in mental health. Our jobs are literally driving all of us bat-shit insane, and there is nothing we can do about it.

The study suggests a solution to the problem is a complete overhaul of the ideal work week. Like we need to get it out of our heads that full-time employment is just the way it has to be, and companies should start making policy amendments to give employees a chance at keeping a looser schedule.

“Most policy options for addressing a potential rise in unemployment levels have focused on measures such as a universal basic income to provide economic support to those without employment,” the study authors wrote. “Our findings support an alternative, more radical, theoretical perspective — a redistribution of working hours in society.”

There is no doubt that most of us could get on board with the concept of an 8-hour work week. Hell, most of us – call us the over-achievers — would gladly sign up for two 8-hour days without any issue whatsoever.

The study authors even suggest limiting work to only a couple of hours each day, allowing the rest of the time to be dedicated to anything and everything else we have going on in our lives.

In cases where restricting work, hours is an impossibility – like almost everywhere in the United States – the study proposes that maybe employers should think about increasing vacation time and paid time off.

Whatever it takes to get workers away from the office for months instead of only weeks.

But the system is stacked against us.

What chance does the majority of us have at living on the wages associated with pulling a single 8-hour day? We’d probably starve. Not unless companies were all of a sudden willing to pay workers $100 or more an hour would this overhaul have a fighting chance at catching on.

Only then, the higher-ups would probably work their employees like a borrowed mule just to make their production schedules, deadlines, and all the other time-sensitive matters that are more easily managed in 40 hours.

The key here, we believe, is striking a balance between work and life. Work to live, not live to work is a solid motto in that respect.

Of course, this is easier for some than it is for others. People who grind it out in the factories and other laborer positions do not have the flexibility to adjust their work schedules for the sake of improving their mental health.

Others, however, have more room to slip in a few changes, like working shorter days, to keep their heads from spinning off their shoulders.

Previous studies have shown that once men reach the age of 40, we really shouldn’t be working any more than three days a week. So if working harder in your younger years can set you up for such a thing, it’s time to get busy.

In addition to wreaking havoc on our mental health, working long hours has also been known to send our physical well-being on a downward spiral.

In fact, some research shows that sitting in an office chair for hours on end (perhaps writing an article about the adverse effects of working long hours) is just as bad as smoking.

A study from Columbia University Medical Center finds that lengthy periods of that sedentary life (13 hours a day) doubles our chances at premature death. We’re better off working 11.5 hours, the study finds.

Other research has found that people who work 55 hours or more per week have a higher risk of heart disease. And one of the latest pieces of research shows that people who put in long hours (10 hours per day for 50 days per year) have a 45 percent greater chance of having a stroke.

If this is you, it is essential to find ways to keep yourself healthy.

Diet and exercise are the two most important factors. Experts suggest getting in at least 30 minutes of physical activity each day.

This can mean getting out of that chair at lunch and taking a walk, doing some push-ups or ducking out of the office early to meet your girl for a nooner.

Allowing employees to skip out on Friday might just be enough of a work-week tweak to make America sane again.

On the other hand, it might only serve to make our Monday mornings worse.