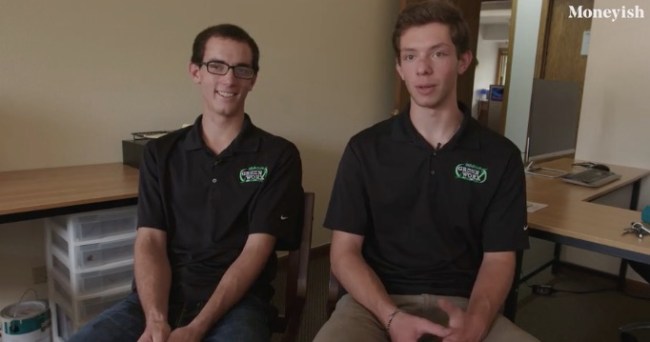 RJ Duarte (left) and his business partner Owen Johnson (right) are still in high school, but that hasn’t stopped them from making BANK mowing lawns. And they aren’t just two teenagers mowing lawns, they started an entire landscaping company in their town of Golden, CO.

Duarte and Johnson’s company is named Green Worx Landscaping and according to their small business profile on Moneyish, they specialize in lawn care, cleanups, snow removal and more. They also primarily hire other teens to work with them and pay them above minimum wage. Each employee starts with a $10 per hour salary and based on performance, compensation goes up from there. You can easily see why their company one of the more desirable part time jobs for teens in the area. And in this profile video below, you can easily see why their company is thriving.

The maturity level here far exceeds anything I saw when I was in high school. For that matter, so does the work ethic and business acumen. RJ Duarte’s mom, Tamara, is even in awe of her own son, saying, “This kid has the drive, it’s like nothing I’ve ever seen in my life,” she said. “Once he puts his mind on something, he’s locked on.”

I agree, he is truly on another level.

It is amazing to see that even in 2017 — when the world appears to be burning and everyone is burried in their cell phones playing with Instagram, SnapChat, HQ and every other app under the sun — you have teens like RJ Duarte and Owen Johnson out there.