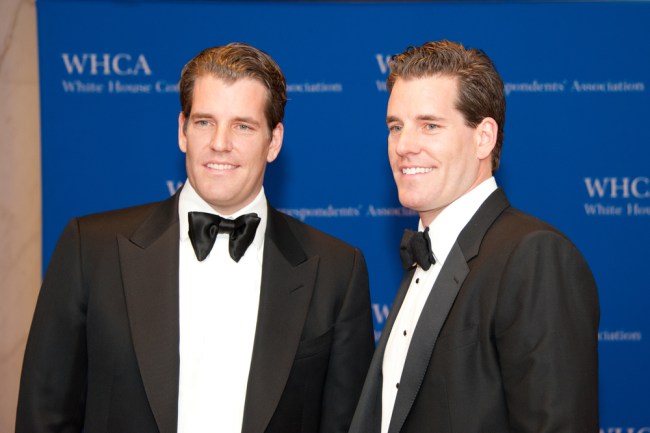 On Wednesday, Bitcoin dropped to under $10,000 for the first time since late November. In the past week, the decline of Bitcoin had wiped out nearly half of its peak value from only a month ago and lost more than $30 billion of value. The extremely volatile cryptocurrency has bounced back somewhat on Thursday and at time of publication, the price had risen to $11,895 according to CoinBase. Two people who had a miserable week because of Bitcoin’s recent free-fall are the Winklevoss Twins.

After the tumultuous last week or two of Bitcoin, the twins’ cryptocurrency holdings are said to have fallen by $922 million in the past month according to Forbes. Don’t start a GoFundMe for Cameron and Tyler Winklevoss just yet because they purchased the popular cryptocurrency in its fledgling days when prices were a fraction of what they are now, so they are still way, way ahead in their investment.

After receiving a $65 million settlement from Facebook’s Mark Zuckerberg, the Winklevosses began investing in Bitcoin in late 2012. At that time, the price of an individual coin was below $10. The Winklevoss Twins invested $11 million which gave them about 120,000 Bitcoins, which is believed to be 1 percent of the entire cryptocurrency’s dollar value equivalent.

At the height of Bitcoin in mid-December, the twins were said to be the first Bitcoin billionaires with their stockpile having a value of approximately $1.3 billion according to the New York Times. However, after the recent Bitcoin downturn, the Winklevoss Twins are no longer Bitcoin billionaires.

In a 2015 interview, Tyler Winklevoss described Bitcoin as a “better gold” and said that the overall market cap for the popular digital currency could be in the trillions. Then there are Morgan Stanley analysts who say that Bitcoin’s value could be worth absolutely nothing.