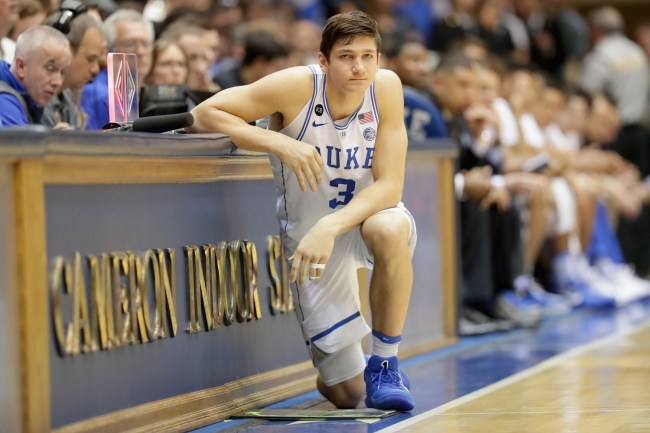 Duke’s Grayson Allen has fully embraced the role as college basketball’s most notorious villain. He’s got the fiery temper, the extremely punchable face, and plays for a team that many believe is the most pretentious program in the land.

The 21-year-old Allen is one of the best players in the country, but his stellar play has been overshadowed by three years of constantly tripping and cheat shotting opponents. Allen was suspended for one game this season after tripping an opponent for the third time this year. Coach K called the continued behavior “unacceptable and inexcusable” and enacted an “indefinite” suspension on Allen, which only amounted to one game.

Let’s take a trip down memory lane. Get it? Whatever.

In a world where we overcomplain and analyze everything, yeah Grayson Allen trip is bad. pic.twitter.com/29yzGhCZ1q

Last night, during No. 17 Duke’s 75-70 win over No. 15 Florida State, Allen tried to play the victim by flopping on an invisible trip by an FSU player, the same player who was the victim of a trip from Grayson last year.

Regardless of your opinion on Allen, I think we can all agree that March Madness is going to be a bit more lit with him in it.