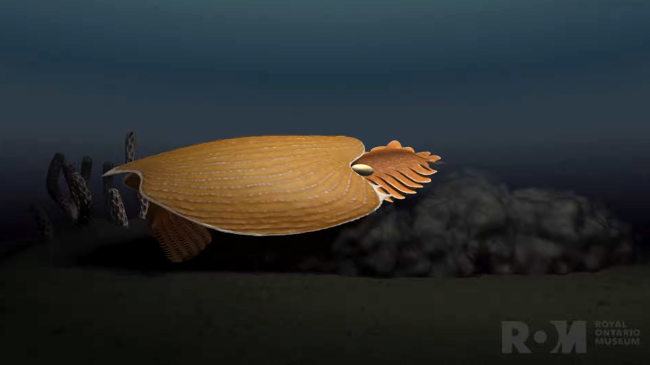 Earlier this week it was reported that a 18 foot long prehistoric sea creature was discovered in Kansas, because at one point in history Kansas was actually underwater. Now we’ve got another, different dinsoaur being discovered in British Columbia.

Named Titanokorys gainesi, this new extinct animal species will be on exhibit at the Royal Ontario Museum, home of the paleontologists that made the discovery, reports CTV News.

“This is an animal that is half-a-billion years old and lived in the ocean at the time,” said museum curator Dr. Jean-Bernard Caron. “It’s about 50 to 60 centimeters long. It doesn’t seem like a lot today but at the time of the Cambrian period, 500 million years ago, this was a giant.

“The sheer size of this animal is absolutely mind-boggling, this is one of the biggest animals from the Cambrian period ever found.”

Related: New Company Says It Will Bring The Woolly Mammoth Back From Extinction Within 6 Years

Caron said the animal is very “strange” looking, adding that it resembles a floating head wearing a large helmet.

Researchers said the animal did have an “incredibly long head,” saying the head is “so long relative to the body that these animals are really little more than swimming heads.”

Strange looking is an understatement.

The museum described the Titanokorys as having “multifaceted eyes, a pineapple slice-shaped, tooth-lined mouth, a pair of spiny claws below its head to capture prey and a body with a series of flaps for swimming.”

“These enigmatic animals certainly had a big impact on Cambrian seafloor ecosystems,” said Caron. “Their limbs at the front looked like multiple stacked rakes and would have been very efficient at bringing anything they captured in their tiny spines towards the mouth.”

Or, as Joe Moysiuk of the Royal Ontario Museum put it, “These things are very alien-looking.”

Forget penguins, that right there? That’s definitely an alien.