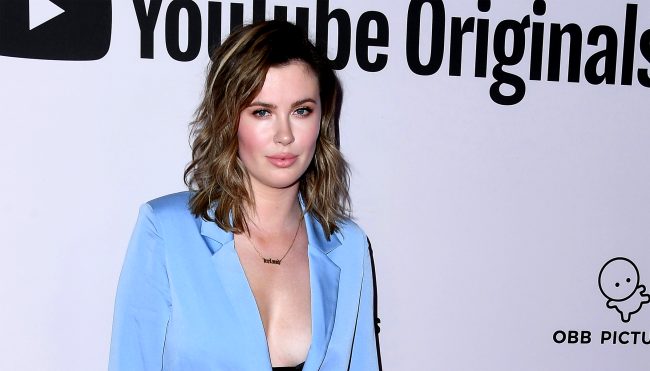 At least one person believes all of the outrage being directed at Travis Scott in the wake of eight people dying while he performed at Astroworld this past weekend is just too much.

That person who claims to have a unique perspective on the tragedies suffered this past weekend at Astroworld in Houston is the 26-year-old daughter of Alec Baldwin, model Ireland Baldwin.

In since deleted messages posted to Instagram, Ireland Baldwin strongly defends Travis Scott and compares the anger being directed at him to that which was received by her father Alec after he accidentally shot and killed Halyna Hutchins on the set of the movie Rust.

“Y’all are really killing me these days,” Baldwin apparently unironically began her screed. “You believe everything that you see on Twitter and TikTok and completely bandwagon on spreading misinformation. First, you were armory/stunt coordination pros when it came to the horrific tragedy involving my dad…and now Travis Scott is demonic because he ALLOWED people to die at his show?

“I’ll start by saying I am heartbroken for the families who lost a loved one. Everyone should feel safe when they are going to enjoy live music. But it’s not Travis Scott’s fault. Any actual musician would validate that you can’t see or hear anyone up there. Especially when wearing in-ear monitors. C’mon people…do a little research before you go spewing cancel culture bulls–t. People lost their children at this show and [all] you’ve got [to] say is that Travis Scott’s music is demonic and [he] belongs in prison? Jesus.”

In a followup post, Ireland Baldwin wrote, “Maybe we should stick to what we actually know, stop making assumptions, stop spreading misinformation, and educate ourselves on things we know nothing about.”

So Ms. Baldwin chastises social media users for speaking without being "experts", then goes on and speaks for all "actual musicians", while not being an "expert" on what she is speaking on herself.

Later, Baldwin was back, writing, “Ok…I’m done reading sh-t on the internet, I think forever. I am in no way defending Travis Scott because, honestly, I don’t know him or care personally, and the only aspect of this I care about is that people died because this brand-new festival neglected to have the proper safety protocols in place.

“I’ve been to two of his shows. I watched people get carried out on stretchers with head injuries and from ODs. I’ve experienced this at maybe 10 other shows I’ve been to in my life where other punk band or rap artists played. He incites the rage. No doubt about that. But I refuse to fall into this twisted cancel culture bullsh-t when it’s coming from people who have no idea how anything works.”

“I ask a bunch of questions before forming any kind of opinion,” she continued. “Also, people on the internet saying it’s the kid’s who died fault and they knew what they were getting into…Um no. There should have been so many protocols in place to keep kids safe.”

Is there a more tone deaf family in America than the Baldwins? https://t.co/lNORFHGrMx

After deleting all of those posts, Ireland was back with another that included a GoFundMe link to help the Astroworld victims and another message.

“Deleted my posts for one reason — people on the internet are scary and so misinformed,” she wrote. “All that matters are the families of those who died in the Astroworld tragedy. My heart breaks for them. The point I was trying to make was stop rage-blaming. Make informed opinions and posts. So many people are at fault. Not just one person.”

Then… Ireland came back, again, some more with even more explanations and defenses of what she had previously written. 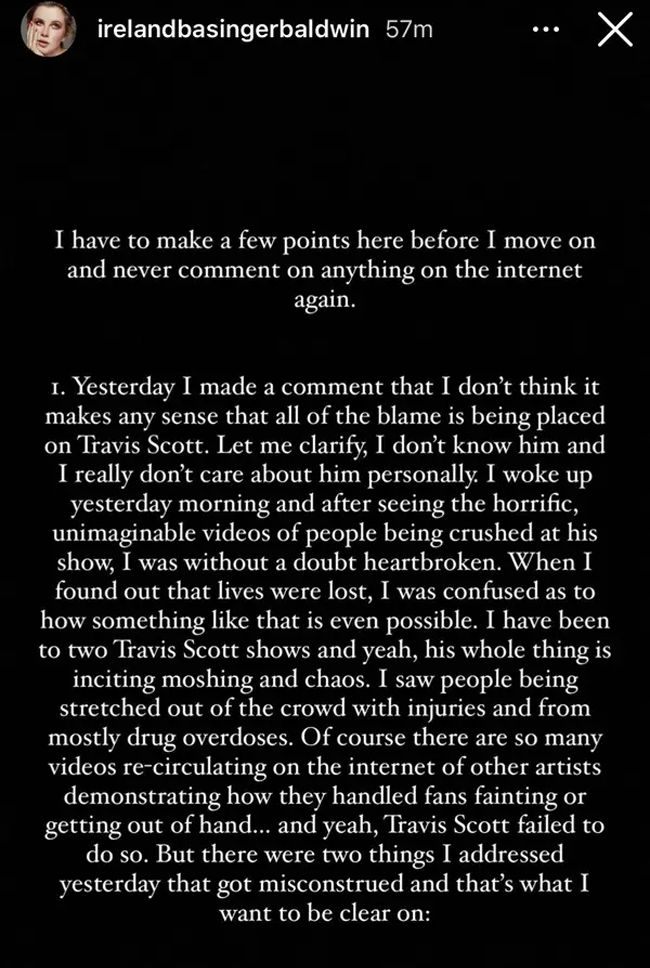 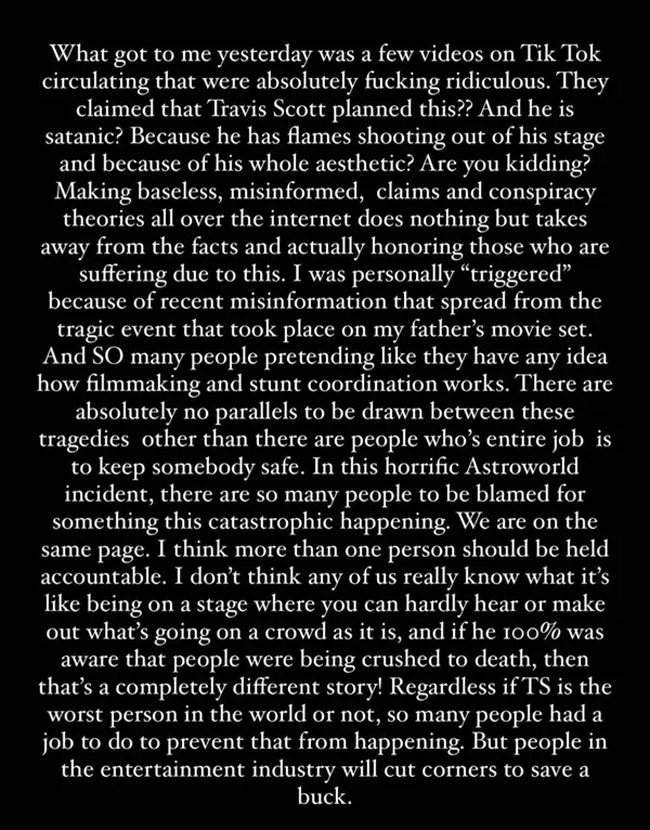 After two more posts defending herself and attacking the media, Ireland Baldwin concluded, “…before I go, you’re wasting your time calling me names. I feel the same as you do, I simply wish that people thought before they placed blame or created theories. And if Travis Scott was aware of what was happening, the truth always has a way of coming out. Have a good day.”

This is the second time in two weeks that Ireland Baldwin has come under fire. Last week, she was criticized for wearing a bloody Halloween costume just days after her dad’s fatal shooting on the set of Rust.

Welcome to today's episode of: Who knew that the rich and powerful don't understand that people dying and being loaded into ambulances in droves is a bad and tragic thing

On Monday, Travis Scott announced that he will be covering the funeral costs for those who died, as well as offering free one-on-one online therapy sessions through BetterHelp for those affected by the tragedy.