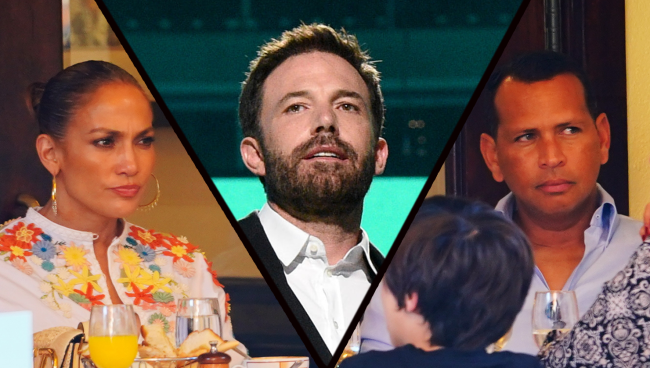 Do you hear that? Listen closely. That is the sound of Alex Rodriguez still pining away about the one true love that got away, Jennifer Lopez.

Rodriguez, who was recently spotted being cheered on by his ex-wife Cynthia Scurtis as he was inducted into the Boys and Girls Club of America’s Hall of Fame (the only Hall of Fame he is getting into these days), is apparently still trying his best to make things work with JLo.

Following Lopez’s return from her trip to Montana with her ex-boyfriend Ben Affleck, Rodriguez was spotted out to lunch in Miami with Stevie Mackey, Lopez’s close friend and longtime voice coach.

Naturally, while there, someone in the media approached A-Rod and asked for his thoughts on Lopez and Affleck vacationing together.

That doesn’t mean he is giving up though, as a source recently told Radar, “he isn’t the sort of guy who is used to being told ‘no,’ and is 100% confident that he can win her back.”

Ironically, one of the rumored big reasons for Lopez calling it quits with the former Yankees third baseman was because of his impending deal to purchase the NBA’s Minnesota Timberwolves might no longer be a problem.

NBA veteran Arron Afflalo, who is heading an ownership group that has pursued the Minnesota Timberwolves for 10 months, told @NYTSports he plans to launch a renewed purchase bid now that Glen Taylor's exclusive negotiating window with Marc Lore and Alex Rodriguez has expired.

Lopez and Affleck reportedly rekindled their relationship just two weeks after she broke up with Rodriguez due in large part to the actor “flooding her with emails while she was filming in the Dominican Republic,” according to TMZ.