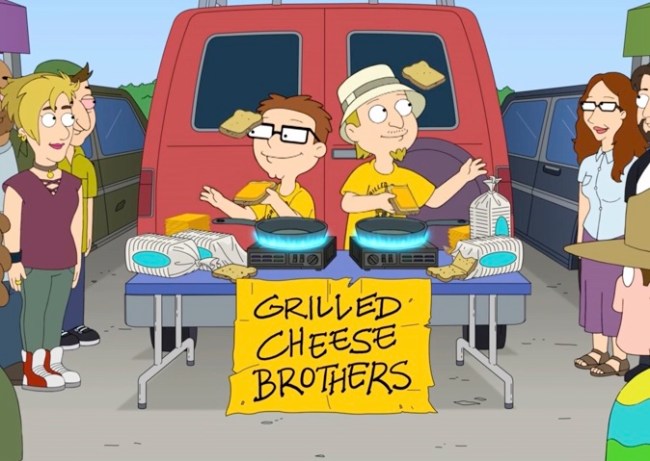 Earlier today, my phone started blowing up with texts from friends. “Did you see the new American Dad Phish episode? You’ll love it.”

Whoa. My favorite band and the intricacies of its deeply complicated fanbase featured on an episode of American Dad? In the same vein as one of the greatest Simpsons episodes of all time, Weekend at Burnsie’s?

That’s the glue in my magnet, Roger.

A couple of us are pretty big Phish fans here at BroBible (See: Cass and myself), so I’d be remiss in my duties as a fake jam band blogger not write something about a such a momentous cultural event.

I love it when TV shows or movies reference Phish and jam band culture. I remember staying up to watch Phish on Saturday Night Live (Jarret’s room!) and Late Night with Conan O’Brien religiously during my teenage years.

Years ago, I howled when Key & Peele ended the series by waxing existentially about our weird little tribe: “When dudes get into Phish, they don’t come back.”

All these little pop culture references about our thing make us feel not so weird about that thing we love and treasure and want to share with others.

The American Dad Phish episode was the brainchild of Tim Saccardo, a longtime Phish fan and producer on the show. Besides his work on American Dad, Saccardo’s credits include writing on NBC’s Community and HBO’s Vice Principals.

Before we get ahead of ourselves: The episode doesn’t actually feature the band Phish nor their music. That’s probably a bummer to some, but the reality is that the four dudes in Phish are doing just fine without being caricatures of themselves in someone else’s intellectual property. They’ve been there, done that. Plus, fans can nerd out to scores of other media dedicated precisely to wonky Phish analysis (IE: the excellent OSIRIS Media podcast Undermine).

Rather, the American Dad Phish episode applies a lens to the inherently funny sociological nuances of Phish fans themselves. Todd Phillip’s Bittersweet Motel did this and became Phish fan canon, ripe with references and inside jokes that make a community a community.

IE: Things you have to be in-on-the-know to appreciate, like a van packed with bumper stickers that says “Prairie Dogs Suck”, a reference to the 2019 prairie dog plague incident that closed down the campgrounds at Phish’s annual Labor Day concert at Dick’s Sporting Goods Park in Denver.

“As some of you already know, I write for the animated TV comedy American Dad and somehow tricked my co-workers into letting me write an episode about the Shakedown scene in the lots on Phish tour. Even though none of the other writers or animators really knew what I was talking about most of the time, they were great sports and we managed to pack a ton of fun Phishy stuff into 22 minutes of animated silliness. Hope you all enjoy it!”

The episode features Steve – fresh on summer break from high school – looking to bond with Jeff, his van-driving, goateed brother-in-law.

“Not fair, all these big brothers are introducing people to cool new stuff but I don’t have one!”

When the two finally hang, Jeff brings Steve to a Phish show. He introduces him to the lot and a motley assortment of characters all brought together by their love of Phish. Bill Walton is there for some reason, because Bill Walton is basically the acid-soaked patron saint of all things jam band related these days.

Despite Jeff’s warnings, Steve cuts a deal with loansharks in the Nitrous Mafia in a desperate attempt to make it to a Phish festival. Things get dark when Jeff’s kidnapped. A custie rescue squad has to step in, saving the day.

What makes the American Dad Phish episode so special?

The show’s Phish references are cheeky and charming. They make geeks like me go “One of us! One of us!”

LOOK AT THE STICKERS AH pic.twitter.com/WfFoJKm6jX

Heck, the driver of the van is even modeled off a real-life fan, Mars – an all-around great guy with mutual friends I’ve run into a handful of times.

American Dad used my buddy Mars’ name and likeness for tonight’s Phish episode! How rad is that?! pic.twitter.com/MxHahovf52

What this episode nails is The Connection between Phish fans; special camaraderie amongst us deeply cliched congregants at a Phish show.

It’s something commonly glossed over when the music press gushes about Trey’s latest musical endeavor or an overzealous, jaded Phish fan dismisses someone’s purely subjective taste in Best Phish Show Openers (fuck off, “Sample In A Jar” is a great opener).

I can’t help to think that you’re missing the entire point of the episode if your only takeaway is snickering at innovative ways to ingest nitrous oxide out of inflatable costumes (… a practice that’s almost certainly already commonplace at Philadelphia area Phish shows).

Phish is THE ULTIMATE older brother and sister band. They’re the band that many got into as an impressionable teenager because your older brother or sister was into them. Or someone who filled that role, if not by blood.

This is a weirdly cultish thing to say, but it’s definitely a reality: A part of the Phish experience is the idea of having a little bit of a family away from your family. A sense of belonging. Likeminded folks with a bond in a likeminded thing. Like having a favorite football team or niche comedian.

Come hide in the herd and float with the flock.

Then, when you show that world to your actual family, something just clicks. They get it. They see why you’re drawn to it. There’s transformative power in that energy.

It’s not an experience if you can’t bring someone along.

After a wide-eyed experience at his first Phish show, Steve proclaims to Jeff: “You did it. you introduced me to a whole new world, big brother. Thanks!”

That line encapsulates a pretty emotive part of the Phish fan experience.

In my case, I was that older brother.

Like many, I took my music-loving younger brother Jared to his first Phish show in the summer of 2003. A sophomore in high school at the time, he dove right on in. We had an all-time great show to share, too, with a 20+ minute Crosseyed and Painless jam and a Harpua.

It was a deeply joyous and impactful moment for the two of us. From that moment on, dorking out over these four extremely talented nerds that made oddly addictive musicial soundscapes became our instant shared passion.

Our trajectory, in bond, mirrored the trajectory of Jeff and Steve: Wooking it out by slinging bottled water or Gatorade in the parking lot, strategizing unique ways to get into shows without a lot of money at hand. Meeting and making life-long relationships, friends, and fellow fans through Phish – sometimes together, sometimes not.

After Phish got back together in 2009, Jared reintroduced me to a feeling I forgot by taking me to my first post-hiatus Phish show. After being slightly stand-offish that my pre-college Phish touring years were behind me, I plunged back in, headfirst, into a music and fan culture I love.

Now it’s impossible to imagine a Phish run where we’re not coordinating runs together, despite living on opposite sides of the country.

The entire experience of Phish – at home, amongst each other, in the lot, at the show, after the show – brings siblings and families and friends together in such a deeply impactful way.

And that’s what makes the Phish American Dad episode so meaningful.

20 or 30 years from now, this episode won’t be remembered as a time capsule of clever inside jokes to Phish culture at this precise moment in time. It was never about what actually happens on the stage at a Phish show.

Rather, it holds up a mirror to the very experience of bringing a few companions on this ride.