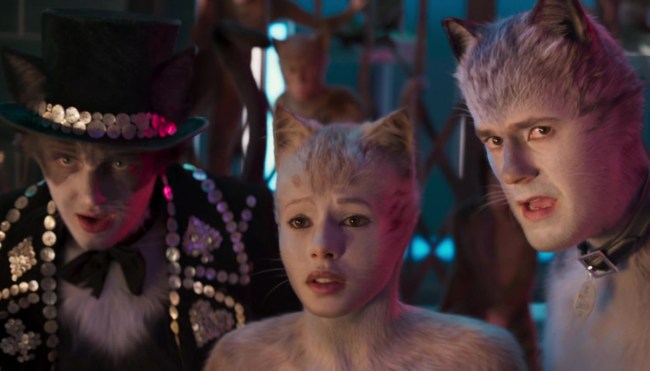 Like many people, I’ve been a bit hesitant to make my grand return to the movie theaters I haven’t stepped foot in since around a month before the pandemic kicked off in New York City. However, my trepidation has less to do with concerns about my health and more to do with the fact that I’d no longer be able to deploy one of my favorite fun facts about myself: the last movie I saw in theaters was Cats.

I knew basically nothing about the musical the movie was based on, but after reading the hilariously scathing reviews it was greeted with upon its release, I knew I had to experience Cats in all of its awful glory on the largest screen imaginable. As a result, I headed to Alamo Drafthouse a few weeks after it came out and (with the help of the sizeable amount of the enjoyment-enhancing substances I consumed before heading in) had one of the most surreal moviegoing experiences of my life.

It may not have changed the world like *Jason Derulo voice* Jaaason DeRuloooo predicted it would, but it certainly rocked mine.

A little over a month later, Seth Rogen live-tweeted his Cats experience and asked many of the questions that had popped into my head during mine—the most pressing of which was also the title of a fascinating video essay put together by film critic Lindsay Ellis: Why is Cats?

If you don’t have an hour to spare, the answer to that query is essentially “Andrew Lloyd Webber wasn’t going to let anyone stop him from making a musical based on a bunch of T.S. Eliot poems about cats, and there was somehow no stopping audiences from flocking to see it once his vision was realized.”

In that video, Ellis also notes how easy it is for key elements of musicals to get lost in translation when they’re adapted for the silver screen, and it’s safe to say director Tom Hooper essentially translated Cats into another language based on the treatment he gave the original director’s passion project.

Andrew Lloyd Webber was not shy about slamming Hooper over his “ridiculous” vision last year, and now, we’ve got a look at just how much he despised the Cats movie thanks to a recent interview with Variety. During the chat, he slammed the film as “off-the-scale all wrong” and revealed he was so disgusted by the final product that he did what was previously unthinkable: buy a dog:

“I saw it and I just thought, ‘Oh, God, no.’ It was the first time in my 70-odd years on this planet that I went out and bought a dog. So the one good thing to come out of it is my little Havanese puppy.

That puppy has been a constant companion of Lloyd Webber’s during lockdown. They have grown so attached that he’s even figured out a way to bring the dog to New York the next time he travels to the city.

“I wrote off and said I needed him with me at all times because I’m emotionally damaged and I must have this therapy dog. The airline wrote back and said, ‘Can you prove that you really need him?’ And I said ‘Yes, just see what Hollywood did to my musical “Cats.”’ Then the approval came back with a note saying, ‘No doctor’s report required.’”

I’d be remiss if I wrote an article about Cats without demanding the release of the mythical Butthole Cut, so with that out of the way, I bid you adieu.