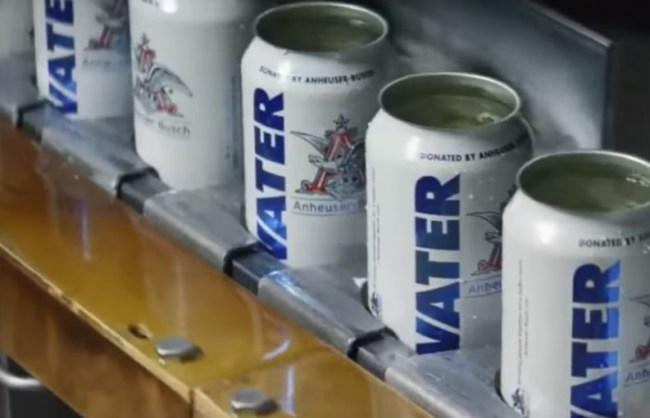 North Carolina, South Carolina, Virginia, and many other states are bracing for what could be the catastrophic landfall of Hurricane Florence. The massive storm brewing in the Atlantic Ocean could potentially cause $27 billion in damages. Anheuser-Busch InBev isn’t waiting to see what damage the Category 2 hurricane will do — the company stopped beer production to can water and send to potential victims of Hurricane Florence.

Anheuser-Busch’s brewery in Cartersville, Georgia, switched from producing beer to canning water. The beer company that makes Budweiser is sending six truckloads of drinking water, which is more than 300,000 cans, to North Carolina, South Carolina, and Virginia.

Since 1988, ABInBev has provided the American Red Cross with more than 79 million cans of water to people who have experienced natural disasters. “For the last 30 years, we have been working with the American Red Cross and our wholesaler partners to provide clean, safe drinking water for communities hit by natural disasters,” said Michel Doukeris, CEO of Anheuser-Busch.

In an Instagram post, Anheuser-Busch announced their effort to help potential victims of the dangerous storm that is expected to bring strong winds, heavy rainfall, and flooding to many areas in North Carolina, South Carolina, and Virgina.

“This year, our Budweiser @SuperBowl commercial, was more than just an ad. It was a celebration of our employees, and a commitment to doing more to support our communities in times of need. Today, we are delighted to announce that we are officially delivering on that promise. Our Fort Collins Brewery has been upgraded and will now officially join our Emergency Water Donation Program, enabling us to deliver emergency drinking water even more quickly—from coast to coast.”

Here is the Budweiser Super Commercial titled “Stand By You” from last February.

“Earlier this year, we recognized the employees who help make the program possible in Budweiser’s Super Bowl commercial and made a new commitment to expand our capacity to produce safe, clean drinking water for disaster relief at our Fort Collins Brewery,” Anheuser-Busch said of their brewery in Colorado. “Today, we are pleased to deliver on that promise, doubling our production capacity to help our fellow Americans in times of need.”

The Cartersville brewery sent over 50,000 cans of water to victims of Hurricane Harvey in August of 2017.

CNN reports that “as of 11 a.m. ET Thursday, the center of Florence was about 145 miles east-southeast of Wilmington, North Carolina, and about 195 miles east of Myrtle Beach, South Carolina.” Hurricane Florence is “projected to make landfall near Wilmington around 2 a.m. Friday as a Category 2 hurricane” according to WRAL.

Life-threatening, catastrophic flash flooding and prolonged significant river flooding are likely over portions of the Carolinas and the southern/central Appalachians into the middle of next week, as #Florence is expected to slow down as it approaches the coast and moves inland. pic.twitter.com/AjMMyjMSwm

The storm surge from the massive storm is already affecting barrier islands in North Carolina.