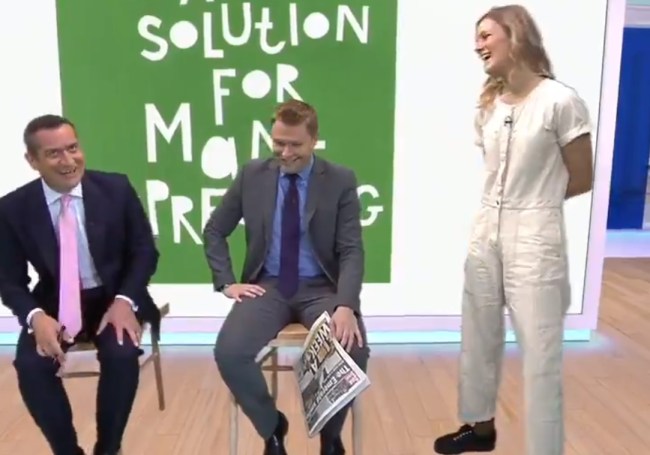 Laila Laurel, who is a 23-year-old 3D Design & Craft graduate from the University of Brighton in England, created a torture device, errr, anti-manspreading chair. The wooden chair had the purpose of stopping men from sitting comfortably or the fauxrage of “manspreading.” Laila called her chair “a solution for manspreading” as if it was a worldwide epidemic like poverty that needed a “solution.”

“I designed and created these chairs in order to identify and challenge problems surrounding the act of sitting that might potentially be more gender-specific, such as man-spreading,” Laurel said. She added that “microaggression” against women and can “turn into something that’s far more aggressive.” “There’s a myriad of problems around it,” she added.

Laurel won the Belmond Award for emerging talent and received over $1,100 in prize money for her chair that literally nobody asked for and literally nobody will ever purchase. The panel of judges said Laurel’s chair was “a bold, purpose-driven design that explores the important role of design in informing space, a person’s behavior and society issues of today.”

Last week, a Sky News TV host bravely tried out the anti-manspreading chair and it went about as well as you would expect. The second he squeezed into the chair you could see that he was visibly in pain. “Oh dear. My voice nearly raised by about an octave there,” he said as he sat in the nutcracker chair. This is nuts.

The host asked if the cameras could cut away for a second so he could “adjust himself” to try to get somewhat comfortable in the castration chair. “I didn’t want any more children anyway,” the host joked.

After several minutes in the medieval torture device, the TV host was happy that the segment was over and would not crush his nuts any longer.

Despite all of the manufactured outrage over manspreading, there is still no word on whether Laurel will make a chair that stops women from bagspreading.

The most annoying thing for men accused of ‘manspreading’ is women ‘bagspreading’ on public transport – and they say it’s just as bad https://t.co/kM8aFZLdj4 pic.twitter.com/adsC4pHDuc