Antonio Brown Has Kanye’s Back, Says West’s Comments Have Been ‘Taken Out Of Proportion’ 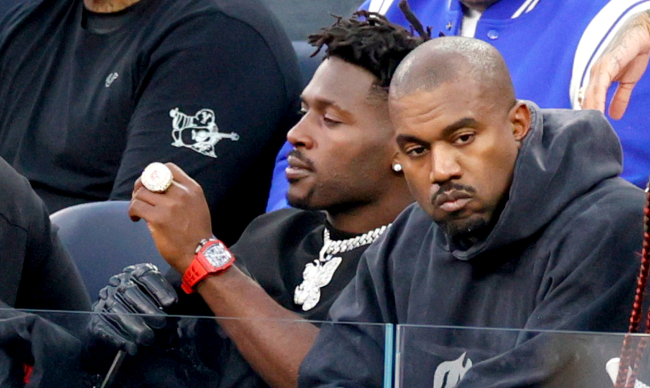 In perhaps the least surprising news to come out in relation to Kanye West losing all of his contracts thanks to numerous inflammatory and often incorrect comments, Antonio Brown says he is still firmly in the rapper’s corner.

Tuesday night, the troubled former NFL wide receiver, who is now the President of Kanye West’s Donda Sports, issued a lengthy statement of support for his boss.

“Over the past few weeks the world’s reactionary and selective outrage at comments in the media made by my brother, Ye, have inflamed and sparked rampant conversation and reflection,” Brown’s statement reads. “I too have been able to reflect on statements that I and others in my circle have made that lack clarity in expressing my stance. The people and brands that have relentlessly profited from Black ideas and Black culture chose to distance themselves at a very specific time: a time that demonstrated their prioritization of certain groups over others.

“None of us in this world are free of judgment, yet we live in a time where scrutiny and pessimism have driven our dialogues on cultural issues toward diatribes. Sensationalism and groupthink have forced people to not speak their minds and act out in fear rather than love. For these reasons, I stand by my dedication to freedom of speech, thought, and opinion. I actively seek to coexist in places where I may have a difference of opinion because it’s diversity in thought that pushes humanity forward. Let me be clear, discrimination of any kind is an injustice to all people, which is exactly why I wish to issue this statement.

“As the President of Donda Sports, I remain. I remain true to the mission of Donda and our amazing staff and community. I remain dedicated to helping clarify statements taken out of proportion by the media. I remain committed to bringing new ideas, experiences, and designs to our world. I remain in support of the humanity that is Ye.”

Translation: AB will remain the President of Donda Sports despite Ye’s recent comments

My brother in Christ there is no possibility you wrote this.

Lol, does whoever wrote that know you aren't going to pay them?

So far, Antonio Brown, who a judge ruled this week owes a moving company employee $1.2 million, stands pretty much alone in his support of Kanye West.

Multiple high-profile Donda Sports clients, including Aaron Donald and Jaylen Brown, have severed their relationships with the company.

West has also lost his deals with Balenciaga, adidas, and the Gap. His divorce lawyers dropped him as a client. His talent agency, CAA, severed ties with him. And he lost a status as a billionaire.