Scientists Alarmed About West Coast Being Devastated By Massive ARkStorm, A Mega-Storm Of Biblical Proportions 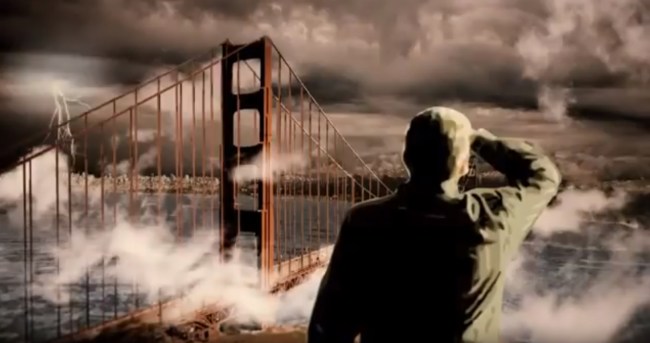 Most of California comes to a screeching halt when they receive just an inch of rain. So could you imagine the devastation that would occur if a mega-storm terrorized the West Coast by unleashing several feet of rain over the course of a few weeks? The destruction from flooding and mudslides would be catastrophic. Scientists are extremely concerned about the prospect of a mega-storm annihilating the West Coast, especially since a weather catastrophe such as this has happened in the past.

Scientists call this mega-storm the “ARkStorm,” which is short for “Atmospheric River 1,000.” Atmospheric rivers are “jets of warm, moist air that originate over the mid-latitude north Pacific Ocean and transport that moisture to California where much of the moisture turns to rain and snow that falls on the state.” Once these “rivers” hit mountain ranges, they can dump an incredible amount of rain in a very short amount of time.

The United States Geological Survey (USGS) said an ARkStorm “is estimated to produce precipitation that in many places exceeds levels only experienced on average once every 500 to 1,000 years.” A new article in the Los Angeles Times says the dangers of an ARkStorm may be even deadlier and costlier than a big earthquake.

The mega-storm could submerge large swathes of California after weeks of constant rain. The storm would bring catastrophic mega-flooding and landslides to the area. An ARkStorm could bring 15 times the amount of water flowing out of the Mississippi River’s mouth. California is so dry and the state is not prepared to deal with this kind of disaster and the USGS warns that California’s flood-control systems and levees could not handle a storm such as this. The U.S. Army Corps of Engineers said that the 60-year-old Whittier Narrows Dam, 13 miles from the heart of Los Angeles, could fail if it was subjected to a mega-storm.

The USGS believes that a major storm of this magnitude would force 1.5 million people to evacuate, flood 25% of California’s land, and cause a mindblowing $725 billion worth of damage and economic losses.

The scary proposition of a massive storm of this strength is that they’re not just a theory, a mega-storm ravaged California and there is documentation of the extensive damage. In the winter of 1861-1862, an ARkStorm raged for weeks in California’s Central Valley and Los Angeles Basin regions and completely flooded the areas.

The rain continued for 45 days, turning towns into lakes and farms were transformed into watery graves for hundreds of people and animals. “Los Angeles recorded nearly 36 inches of rain while Sonora in the Sierra Nevada foothills measured more than 100 inches,” marine meteorologist John Lindsey wrote.

Downtown Sacramento was so submerged that it was only accessible by boat. The Great Flood of 1862 forced California to temporarily move its capital to San Francisco. One-third of California’s taxable land was destroyed, which nearly caused the Golden State to go bankrupt, and killed just over 1 percent of the state’s population.

Growing up in the Central Valley, I never heard about the Great Flood of 1862. @DrLucyJones says that it significantly shaped the agriculture, industry and way of life, contributing to what the area is like today. #SciFriLive https://t.co/KPDaWShowP pic.twitter.com/SJbNroXFXT

Besides the Great Flood of 1862, geological evidence found that California floods also happened in the years of 212, 440, 603, 1029, 1418, and 1605. That would put California on the clock for the next apocalyptic flooding of biblical proportions, which could happen any time now.

Lucy Jones, an esteemed seismologist, is extremely concerned about the chance of a mega-storm. Jones’ book, “The Big Ones: How Natural Disasters Have Shaped Us (and What We Can Do about Them),” looks back to the past at previous earthquakes, floods, and tsunamis and looks at what kind of disasters could be coming. “In LA, they said there was water from ‘mountain to mountain,’” says Jones. “All of Orange County was underwater. And the Central Valley was underwater for six months.”

“The false sense of security included in the phrase ‘900-year flood’ combined with the promises of 20th-century water infrastructure have put us in a bind,” water historian David Reid told the L.A. Times. “That’s because a mega-flood is impossible to predict. And if the water infrastructure fails, we’re in big trouble.”

“We only have about a century of records to refer to in California. So, they are extrapolating in the dark,” said University of California Los Angeles climate scientist Daniel Swain. It should be noted that there is still a very small chance of a storm of this size striking this year or the next, but science suggests that it will happen eventually.

But it wouldn’t just be California that is affected by an ARkStorm, the entire West Coast would feel the wrath. The Great Flood of 1862 inundated Oregon, Idaho, New Mexico, Nevada, Arizona, and Utah with water. The Los Angeles Times said that a “rare mega-storm is rendered all the more inevitable due to climate change.” Maybe it is time to invest in a kayak. Just incase.

RELATED: Record-Breaking Cold Belts US With Temperatures Colder Than Antarctica – Polar Vortex 2019 By The Chilling Numbers