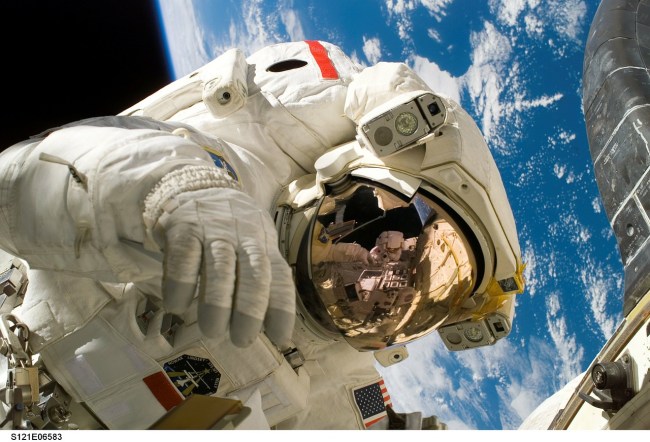 Space travel is one of those career paths that nearly every young child thinks about getting into at some point in their early years. However, the dream of becoming the next intergalactic super explorer starts to diminish once they are made aware of the treacherous conditions that come from getting mixed up with adventures of a cosmic nature.

The ridiculously cold temperatures, radiation, and even the possibility of getting sucked into a black hole only to become the slave of some rough-neck extraterrestrial with a seven-headed pecker are all cataclysmic events that most sane people want to avoid at all cost. In fact, the only other snag we can think of that could possibly make the prospect of interplanetary travel less desirable is if it caused herpes.

Researchers at NASA are now saying astronauts sent out on both short and long-term space missions are coming back to Earth with the incurable virus known around the playground as the gift that keeps on giving: cock pocks!

It seems these spacemen are returning with other nasty viruses, as well. Chickenpox and shingles are among some of the foul diseases astronauts are often forced to contend with no sooner than pulling off their space suits.

The results of this study, which were published last week in the journal Frontiers of Microbiology, indicates that well over half of the space explorers sent into orbit over the years have returned with some kind of sex malady for which they likely had trouble explaining to their significant others.

“Honest, honey! I haven’t been cheating on you. The doctor said I got herpes from space.”

So, if you needed just one more reason never to leave this planet, how about the possibility that you might come back with your mouth or genitalia looking like a deleted scene from The Elephant Man?

“To date, 47 out of 89 (53%) astronauts on short space shuttle flights, and 14 out of 23 (61%) on longer ISS missions shed herpes viruses in their saliva or urine samples,” lead study author Satish K. Mehta at Johnson Space Center told CNN. “These frequencies—as well as the quantity—of viral shedding are markedly higher than in samples from before or after flight, or from matched healthy controls.”

But it doesn’t appear that space itself is actually plaguing astronauts with junk funk and other rotten bugs, but instead, it is their body’s’ reaction to being out there surfing the stars in the first place.

If you weren’t already aware, space is perhaps the most stressful environment next to prison that a human can be exposed to. Outer space is a raging asshole and it doesn’t actually want humans up there fucking around.

Everything about a spaceflight mission wreaks havoc on the body, causing bone and muscle loss and even the increased risk for heart attacks.

Zero gravity conditions, shit-whipping G-forces, and the psychological drain of being confined to small places for extended periods are just the tip of the iceberg when it comes to the heavy stresses the body endures while up there searching for life beyond the fucked up scene we’ve got going on down here.

Researchers believe this stress is what causes dormant viruses to be unleashed. These are conditions that could have possibly lingered in the body sound asleep for all eternity if not for a person’s hell-bent desire to tour the cosmos.

The study indicates that interstellar travel essentially butchers the immune system and allows diseases to “wake up” and thrive while the body struggles to keep kicking. If that doesn’t tell us that we need to stay the fuck out of space, we don’t know what does.

This is just another challenge that NASA and other space programs must overcome before taking them to the next level. Try being in a rocket on a 34-million mile journey to Mars only to find out just past the dark side of the moon that it hurts to pee and blisters are starting to form around everyone’s lips. It’s not going to be a very pleasant ride—not in the slightest. Hell, driving from the doctor’s office to the CVS for ointment is painful enough and there aren’t any pharmacies in space.

The last thing we need is for Earth’s secondary civilization on Mars to start off looking like the waiting room of a free clinic. We can see it now: people would eventually start wearing hats that read “Make Mars Herpes Free Again” and try to convince the government that we need to build a wall around the entire planet. Regardless of your politics, nobody would be able to argue with them!

It should be pointed out that researchers are really only speculating that stress is the contributing factor in this uprising of space herpes. NASA actually has no idea what is causing the outbreaks. It could be stress, microgravity, radiation or any number of things. Finding out is apparently the next giant leap for mankind.

Once scientists pinpoint the culprit, they will have the capacity to develop countermeasures to prevent these diseases from rearing their ugly heads in the future. Until then, however, rumor has it that NASA is putting Valtrex in the Tang.