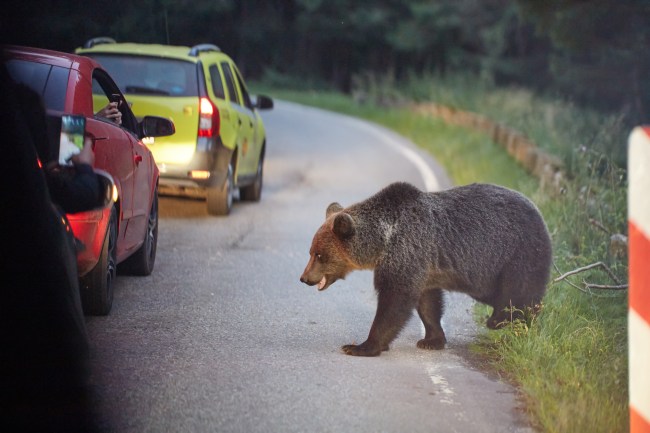 Has anyone in life ever had to tell you to stay far away from bears? I know there are signs throughout every National Park in America where a tourist might come in close contact with bears to give them space but isn’t it just common sense that tells us to stay TF away from bears because they’re enormous wild animals with razor-sharp claws and they can be temperamental and turn on us in an instant?

I honestly cannot remember anyone telling me ‘Cass, you should stay away from bears to be safe’ because it’s such a basic concept that every instinct built up from tens of thousands of years of humanity has taught me that getting really close to a bear in the wild is a certifiably idiotic idea.

Alas, some people gotta do it for the ‘gram and putting their lives on the line is just the tiny cost of chasing that clout in search of likes on IG. This woman in Bacau, Romania wasn’t thinking about the possibility of getting mauled to death by a bear and having the skin clawed off her face by a wild animal. Nope, she was thinking about how awesome she’d look on IG with a filtered photo of her standing next to a bear.

Thankfully for all parties involved, the bear just gives her that ‘two for flinching’ treatment and scares the piss out of her, sending her running for safety. Had the bear actually attacked here there’s a chance the bear would’ve later had to be put down despite 100% minding his own business.

READ NEXT: A Hungry Wolf Showed Up On The Live Bear Cam In Alaska And Has Been Crushing Salmon Ever Since

I love that her reaction to almost getting mauled by a bear is to run into traffic. Not to jump inside the car. To put an immediate safety barrier between her and the wild bear, but to jump into traffic where she could’ve gotten taken out by a car.

Do we think she learned her lesson? I’m not convinced. I could 100% see this person trying to do this again in the future.

RELATED: Yellowstone Tourist Gored Multiple Times By A Bison After Getting Way Too Close