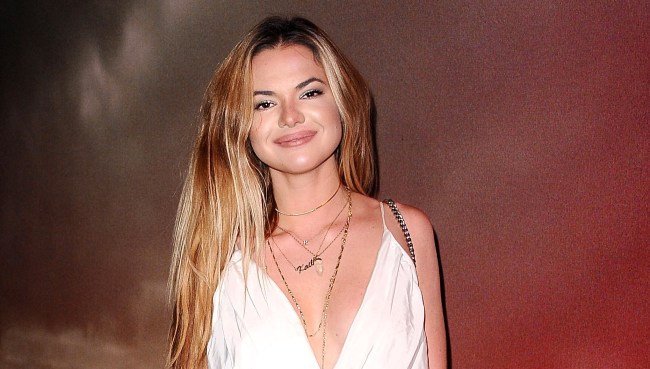 After her famous sister Bella Thorne made enemies by reportedly raking in a couple of million dollars in just two days after joining OnlyFans, Kaili Thorne also decided to get in on the action by making an OnlyFans account of her own.

It’s not been going well for her.

Bella felt the ire of not only subscribers to her OnlyFans account for not posting any nude photos – something she clearly stated she would not be doing – she also angered the numerous sex workers who use OnlyFans to generate income when the site decided to cap how much they can be paid after the actress broke the bank (which the site claims was unrelated).

Kaili has too already angered several OnlyFans content creators when she told one commenter that sex work is “not real.”

On Tuesday, she posted a story highlighting a comment she left online saying, “The argument is that sex should not be work. That’s why it turns into human trafficking and should be stopped. Sex work does not exist. It is not real.”

She went on, “Would I call it legit? No. Nothing about ‘sucking for crack’ is legitimate.” She also said users were “not creative.” “All your bios say the same thing: ‘Insatiable s–t.’ Get creative and maybe you’d keep your clientele,” she said in a video.

But Kaili tells us that she wasn’t slamming anyone — she was just responding to women commenting on her page. “These girls … have been bullying me nonstop,” she said. “I was not calling any sex worker ‘insatiable s–t’ or any other type of s–t. I was directing my comments back to these girls that call themselves that.”

“I’m saying that since sex is not work to me, I don’t consider it a job to me,” she adds. “I’m not saying it about anyone else. What people do for a living is their choice.”

Kaili’s sister Bella, who claimed to be creating a documentary about her experiences on OnlyFans (though that has since been brought into question), and using the income to build her production company and donate to charity, apologized for her actions, saying she would do what she could to get OnlyFans to roll back their policy on capping user income.

…I am a mainstream face and when you have a voice, a platform, you try to use you in helping others and advocate for something bigger than yourself. Again in this process I hurt you and for that I’m truly sorry.

Kaili, on the other hand, doesn’t seem too interested in saying she’s sorry.