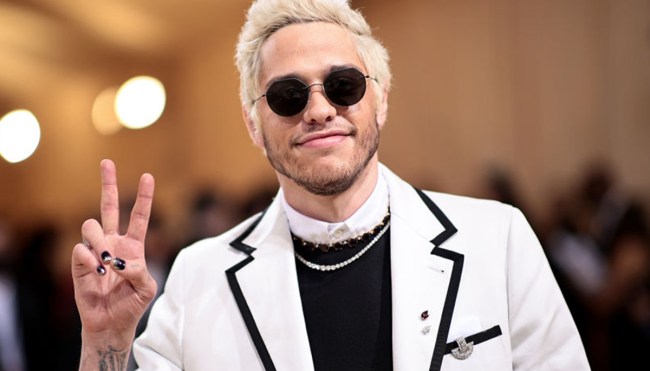 When Pete Davidson joined Saturday Night Live in 2014 at the age of 20, he was one of the youngest people to ever earn a spot in the cast and became a fairly divisive figure thanks to his fairly unpolished sketch comedy chops and a tendency to break that rivaled Jimmy Fallon’s.

You could argue he hasn’t really evolved that much as a comedian over the past eight years, but as a reformed Pete Davidson Hater, I can’t help but respect him for how far he’s been able to come and what he’s been able to achieve over that span—especially when it comes to his love life.

To say Davidson has cleaned up on the dating scene over the past few years would be one hell of an understatement, as he bounced back from his broken engagement with Ariana Grande by linking up with Kate Beckinsale for a brief fling and has spent the past few months engaged in a fairly one-sided feud with Kanye West after striking up a new relationship with Kim Kardashian.

That hot streak has come as a surprise to a lot of people, as even Davidson would admit he’s not exactly the textbook definition of “traditionally attractive.” He’s shed some light on that topic in the past by revealing how he approaches women he’s interested in and the way he treats them while in a relationship, and based on the results, he seems to be doing something right.

Last year, Emily Ratajkowski provided some more perspective when she attempted to explain Davidson’s appeal, and now, we’ve got some more insight courtesy of Ben Stiller, who addressed the topic during a conversation with Howard Stern on Wednesday.

Here’s what he had to say via Yahoo:

“Pete is having a moment in time right now. He’s an incredibly sweet guy. He’s so personable. He got such charisma. He’s funny, he’s really funny, but he has become really famous, I think, for dating…

People were attracted to watching him on the show and he just has a real charm about him.”

It’s Pete Davidson’s world and we’re all just living in it.