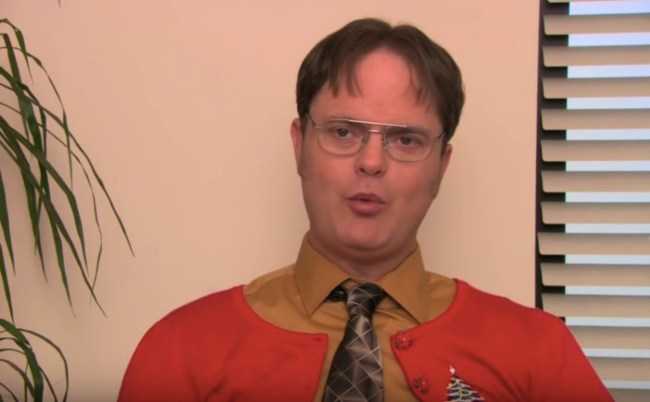 Dwight K. Schrute was easily one of the top five characters on NBC’s The Office. The show went off the air 2,329 days ago on May 16, 2013, but the legacy of Dwight lives on. He did more for the world of beet-related humor than any other person/character in history.

Thankfully for fans, we’ve got Comedy Central which airs reruns every day/week as well as Netflix where The Office is BY FAR the most binge-watched show. Of course, that’s changing in the near future and The Office will leave Netflix to go live on NBC-Universal’s own streaming service but that won’t change the show’s official YouTube channel.

YouTube is really the only place we’re getting quasi-new content from The Office these days because they release clips like this one, tributes and supercuts, to the show’s most famous characters and moments. This one showcases the all-time greatest quotes from Dwight Schrute.

In terms of dialogue/words spoken, Dwight K. Schrute was actually the #2 character on NBC’s The Office. Over the course of nine seasons, Dwight spoke 74,606 words compared to Jim’s 57,373 words and Pam’s 44,640. Dwight was only second to Michael Scott who was by far the lead character with 146,600 words according to a study from Simple Texting.

Before I get too sidetracked, here is the tribute all fans needed, one that pays homage to the greatest quotes from Dwight K. Schrute.

That study I mentioned above also determined things like ‘most positive an negative characters’ and the smartest ones based on their reading levels. For what it’s worth, Dwight, Nellie, and Ryan all have the same reading level which is noticeably higher than Jim’s.