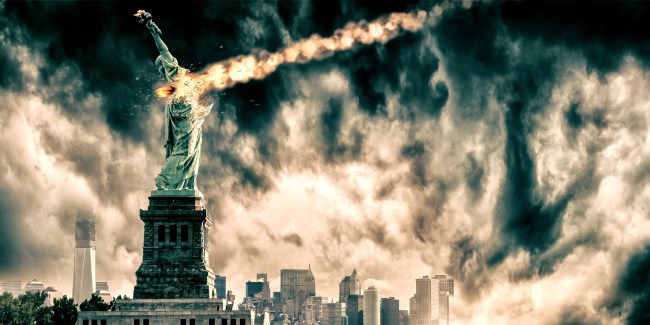 I know, I know, I know. We’ve heard it all before. The world is going to end on so-and-so date and so far, obviously, none of those doomsday prophecies have come true… YET.

Just ignore that prediction conspiracy theorists had back in July of 2016, and in September that year. And the three predictions they made in January of 2017. And those other times the world was doomed, like back last February and those two times in May, or that one in December.

This time, THIS TIME, the BIBLE says the world is going to end, THIS YEAR, and if you can’t trust the Bible, then all hope is already lost anyway, right?

Here’s how it’s all going to go down, according to a very smart guy named Mathieu Jean-Marc Joseph Rodrigue (via The Daily Star)…

Mathieu Jean-Marc Joseph Rodrigue has highlighted a passage in the Book of Revelations as a sign that 2018 could be the Earth’s last year.

It reads: “He was given authority to act for 42 months.”

Mr Joseph Rodrigue reckons the passage from Revelations when added to the crop harvest and price indicates a shocking truth.

He wrote: “I heard a voice in the middle of the four living beings. This is wisdom. He who has intelligence can interpret the figure of the beast. It represents the name of a man. His figure is 666.”

To find the date of the apocalypse, he takes the 666 figure and adds it to his earlier calculations, with the 42 months from the bible.

When all added together, he claims this indicates the world will end on June 24, 2018.

Despite all of this tremendous knowledge and insight, Mr. Rodrigue did not specify exactly HOW the world was going to come to an end, but, you know… semantics.

For what it’s worth, in case THE BIBLE isn’t enough to make you believe, Nostradamus ALSO predicted (yes, again) that the world would end in 2018.

But the world will not end in one swift cataclysm, and conspiracists instead believe that Earth will suffer great natural disasters, deadly asteroids as well as the horror and destruction of World War 3 – all three of which have alarming contemporary resonance.

I mean, what the heck did you think that supermoon meant back in December? Pffft… Planet X is coming, people, and there’s nothing we can do to stop it.