Bill Burr Defends Gina Carano, Says Cancel Culture Could Come For Him: ‘Now I Gotta Watch What I Say’ 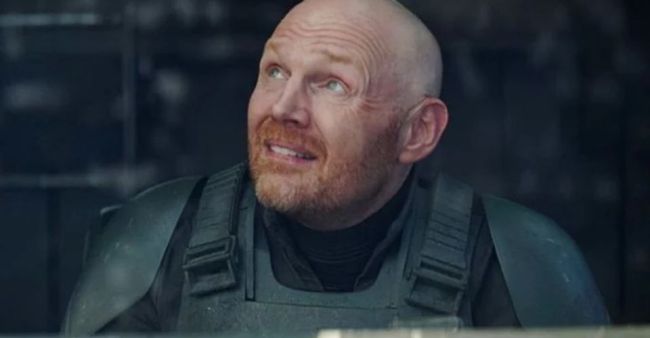 Bill Burr reacted to the recent firing of Gina Carano by defending his fellow The Mandalorian co-star. The usually outspoken comedian also noted that he may have to bite his tongue now, otherwise the cancel culture mob could try to get him fired.

During an episode of The Bill Bert Podcast, comedian Joe DeRosa talked about how extreme cancel culture has gotten, and cited Carano’s firing from the massively popular Disney TV show as an example.

“I was saying it the other day about Gina Carano,” DeRosa told hosts Bill Burr and Bert Kreischer. “It’s like look you can say that her tweet was stupid or clumsy or whatever. But the reaction to it, to me, was so crazy that I was like, ‘Guys this is going to be a thing you look back on…”

DeRosa pointed out how former President George W. Bush was labeled as “the devil,” but now goes on the late-night talk show circuit and gets applause.

“And they are going to be doing that with half of these canceled people,” DeRosa continued. “And going, ‘Sh*t man, sorry about that. sorry about the last eight…’”

DeRosa then detailed the controversial Instagram post that got Carano canned from the Star Wars show. He said Carano’s post attempted to make a comparison of the current hatred towards conservatives for their political beliefs to the Nazi Germany government making their citizens hate Jews. Lucasfilm called Carano’s social media posts “abhorrent and unacceptable” in how they “denigrated people based on their cultural and religious identities.” Carano was fired on Feb. 10.

“I get what she was trying to say,” DeRosa explained, but noted that it was a “dumb thing to do.”

“How is it any different from all of the people on the left when Trump got elected, and they said, ‘He’s like Hitler.’ How is that any different? That’s the same reduction of circumstance, but on one side of the coin it’s okay to say and the other it won’t even be entertained.”

In fact, The Mandalorian star Pedro Pascal compared former President Donald Trump’s immigration policy to Jews being rounded up by Nazis in the Holocaust. Pascal did not get fired or suffer any punishment from Disney.

Disney/Lucasfilm fired Gina Carano for comparing the current political climate in the U.S. to Nazi Germany.

Pedro Pascal is still employed by them yet shared this horrific comparison of children from the Holocaust to America's immigration crisis.#FirePedro @THR pic.twitter.com/NVuPNRC0pg

“I just don’t get this place where we’re in where there’s no room for discussion for anything,” said DeRosa.

DeRosa then highlighted that the cancel culture environment is so overwhelming that Hasbro discontinued the Cara Dune action figures, which is who Carano portrayed on the Disney+ show.

Burr, who plays the character “Mayfeld” on The Mandalorian, reacted to the Carano situation.

“I’m on that f***ing show,” Burr proclaimed, then warned that the outrage mob will try to cancel him, “Now I gotta watch what the f*** I say!”

“It’s a weird time. Unless she did some truly horrible sh*t or said overtly racist sh*t,” Burr said about Carano. “I don’t know. I think there is just too many channels. And then you gotta do sensational sh*t…I don’t know what the f*** it is.”

Burr then defended Carano as a person, “She was an absolute sweetheart. Super-nice f***ing person and, you know, whatever.”

The comedian said the fauxrage mob will attempt to manipulate his statement in an effort to get him fired from The Mandalorian, “And somehow someone will take this video and they’ll f***ing make me say something else, and you know, try to get rid of my bald action figure!”

Burr provided a simple solution to the toxic cancel culture, “How about you just be an individual, and you continue to buy tickets to people who you wanna go see?”

Following her firing from The Mandalorian, the actress and former MMA fighter released a statement.

“I am sending out a direct message of hope to everyone living in fear of cancellation by the totalitarian mob,” Carano declared. “I have only just begun using my voice which is now freer than ever before, and I hope it inspires others to do the same. They can’t cancel us if we don’t let them.”

Last month, Carano announced that she will produce and star in an upcoming movie for The Daily Wire, a conservative news and media company founded by political commentator Ben Shapiro and director Jeremy Boreing.

The discussion about cancel culture and Carano’s firing begins around the 21-minute mark.