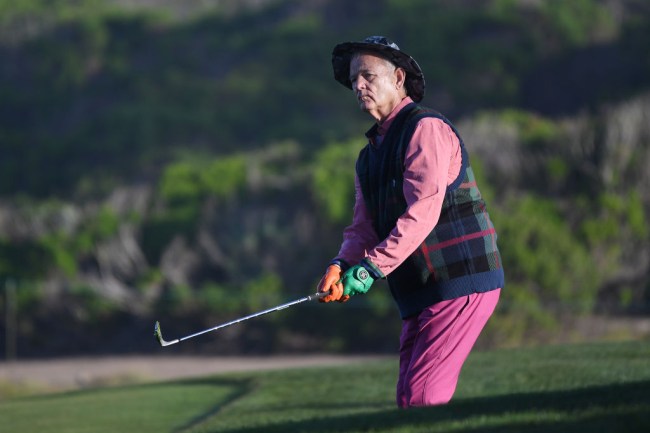 Bill Murray knows comedy, golf, and alcohol, and the legendary comedic actor put all three of his areas of expertise on display this past weekend at the Pebble Beach Pro-Am.

Murray, who first made an appearance in the Pebble Beach Pro-Am in 1992, channeled his inner Carl Spackler as he was playing in the famous Northern California celebrity golf tournament. Some of Murray’s fans wanted to get a close encounter with the Caddyshack at the Pebble Beach Pro-Am, so they used the perfect Bill Murray bait — tequila.

“Hey, Bill!” I got a shot of tequila for you,” the female fan yelled to Murray. “I know you’ll like it!”

And just like a moth is instinctively attracted to a glowing lamp, Murray made a beeline to the woman offering him booze. Murray took the plastic cup and ripped the tequila shot and tossed the cup back into the crowd, as he walked to the next hole.

Not sure taking a plastic cup of a clear liquid from a stranger is the move to make, but counterpoint: It’s free alcohol and only a monster would want to harm the American treasure that is Bill Murray.

Murray should be obligated to scream “It’s in the hole” after every shot of booze.

Tequila is one of Murray’s favorite spirits as we saw when he bartended at a Brooklyn bar and chugged shots with fans.

The tequila did not help Murray on the green. The 69-year-old comedic actor missed an easy putt, but then swooped in to casually tap the ball in the hole while it was still rolling. Murray tossed his putter and walked away. Unfortunately for Murray, nobody offered him a shot of tequila.

Is Bill auditioning to play Phil one day? 🤔 pic.twitter.com/9gbYX28PUM

Canadian Nick Taylor would win the Pebble Beach Pro-Am, finishing 19 under for the tournament. He finished four strokes ahead of Kevin Streelman and five strokes ahead of Phil Mickelson on the leaderboard.

It's his second TOUR win and first since 2014. #LiveUnderPar pic.twitter.com/zst3hZzrLT