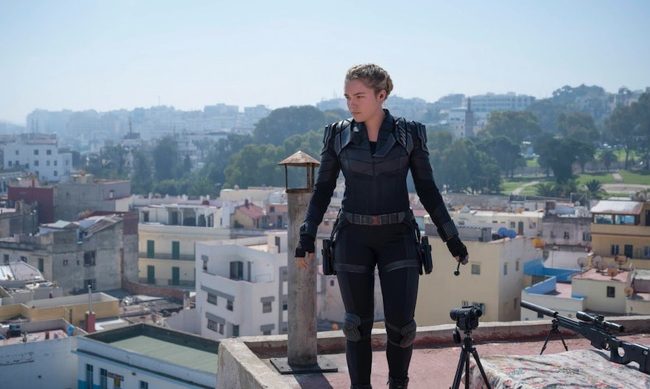 434 days after it was originally supposed to hit theaters, Black Widow — the first film in Phase Four of the Marvel Cinematic Universe — has arrived, and with it came one of Marvel’s famed, future-film-teasing post-credit scenes.

Sitting at the gravesite of her fallen sister Natasha, Yelena Belova — the MCU’s new Black Widow played by the scene-stealing Florence Pugh — is visited by none other than Julia Louis-Dreyfus’ Contessa Valentina Allegra de Fontaine, who first made her stunning debut back in the fifth episode of The Falcon and the Winter Soldier.

While not much is known about Allegra de Fontaine the person, other than the fact that she prefers to be called “Val” and is essentially an Upside Down, alternate dimension, (more) evil version of Veep‘s Selina Meyer, her intentions are perhaps a bit more clear.

After recruiting Wyatt Russell’s U.S. Agent to join her special task force –“Things are about to get weird,” Val tells Walker, “So when they do, we’re not going to need a Captain America. We’re going to need a U.S. Agent” — she appears to be doing the same with Yelena, although she’s doing so by positioning Hawkeye as her target.

You see, while audiences are aware of the nature of Nathasha Romanoff’s death — that she and Clint Barton literally fought each other for the right to sacrifice themselves — those actually living on Earth within the MCU do not: all they know is that while both Clint and Nat went to Vormir to retrieve the Soul Stone, only one of them returned.

Now, given that Val seems to be trying to leverage the anger that John Walker and Yelena Belova have towards specific members of the Avengers, it appears that the team she’s attempting to build is in direct contrast to the MCU’s titular superhero group.

Therefore, the question now becomes: A) Will they be the Thunderbolts, the Dark Avengers, or something different? and B) Will this group be used to carry out their own missions or be weaponized against the Avengers themselves, setting up another potential Civil War situation. The former of the two scenarios feels more likely, as the idea of an anti-hero-led group that goes on missions and fights battles that are too complicated, too grimy for the primary Avengers is a far more compelling storyline than rehashing the old “heroes fight heroes” trope.

Given that both Jeremy Renner’s Clint Barton and Florence Pugh’s Yelena Belova are confirmed to appear in the upcoming Hawkeye project, fans will likely be further filled in on exactly what Val is planning when that series hits Disney+ later this year.

At this time, Hawkeye — which will also feature Hailee Steinfeld making her debut as Kate Bishop (yet another potential young Avengers, by the way) — has no official release date and is expected to his Disney+ in the Fall.