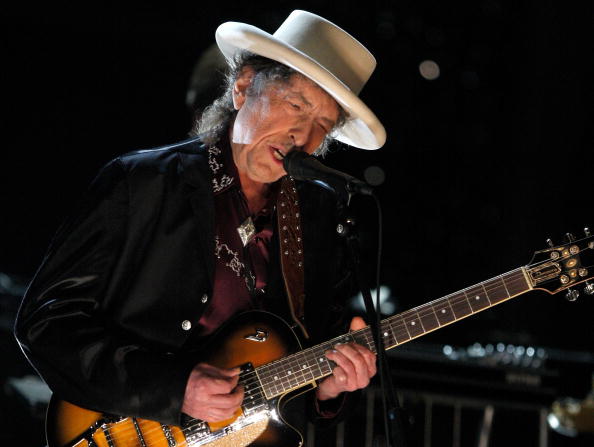 Celebrities having their own liquor companies is so hot right now. Ryan Reynolds has his “best damn gin on the planet,” Matthew McConnaughey has his Longbranch Wild Turkey Whiskey, Wu-Tang Clan have their own brand of vodka, Diddy and Jay-Z made millions from their spirits, Dwayne Johnson just started a tequila company, George Clooney sold his tequila company for $1 billion. Now Bob Dylan gets into the celebrity alcohol game with his very own whiskey.

Introducing Heaven’s Door, the first whiskey company headed by a Nobel laureate, Grammy Award-winner, and recipient of the Presidential Medal of Freedom. Dylan collaborated with Marc Bushala, liquor entrepreneur and co-founder of bourbon brand Angel’s Envy, to make his own collection of whiskeys. Starting next month, Heaven’s Door will introduce a straight rye, a straight bourbon, and a double-barreled whiskey.

“We both wanted to create a collection of American whiskeys that, in their own way, tell a story,” Dylan told the New York Times. “I’ve been traveling for decades, and I’ve been able to try some of the best spirits that the world of whiskey has to offer. This is great whiskey.”

“Dylan has these qualities that actually work well for a whiskey. He has great authenticity. He is a quintessential American. He does things the way he wants to do them. I think these are good attributes for a super-premium whiskey as well,” Bushala said of the legendary musician. “Sometimes you just get a long look, and you’re not sure if that’s disgust or approval.”

The process of crafting an authentic whiskey worthy of being sipped and backed by Bob Dylan wasn’t always easy. Dylan was not impressed by one of the early prototypes of the double-barreled whiskey. “It should feel like being in a wood structure,” Dylan said. Heaven’s Door Spirits chief operating officer Ryan Perry went back to the drawing board and remarked, “really helped us think about barrel finishing in a different way.”

The double barrel and Tennessee straight bourbon whiskeys cost $60 and the straight rye will run $90. Orders start shipping on May 21st from the Heaven’s Door website. The emerging spirit brand plans to open its own distillery in Nashville sometime next year.