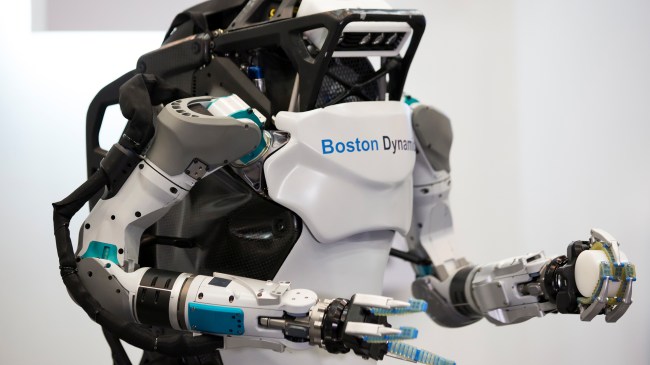 Plenty of people have discussed the possible advent of a robot uprising with varying levels of gravity since the concept of robots first became a thing. However, those once hyperbolic fears have gotten increasingly realistic in recent years.

It would be foolish to suggest the folks at Boston Dynamics have had any ill intent while attempting to usher in the future we’ve been promised for decades. With that said, it’s been a bit hard for the average person not to be a little worried about how the technologies they’d developed could be harnessed.

The company has existed since 1992, but it didn’t really begin to turn heads until after the start of the new millennium. Its first four-legged robot (dubbed “BigDog”) was unleashed upon an unsuspecting world in 2004 with the help of government funding supplied by the Department of Defense, whose involvement understandably made some outside observers weary even though the machine in question was designed to be a glorified packmule.

Since then, Boston Dynamics has provided the world with plenty of chances to prepare for the seemingly inevitable arrival of our new robot overlords thanks to the many videos it’s used to showcase the impressive leaps it’s made.

That includes multiple clips involving “Spot,” a more streamlined and advanced version of BigDog that has “learned” how to open doors and fight back against humans that stop it from doing its job (that model served as the basis for the Black Mirror episode involving a vision of a dystopian future that has only gotten more plausible over time).

There’s also Atlas, the humanoid robot that’s mastered the art of parkour and possesses gymnastics skills that give Olivia Dunne a run for her money. That model is at the center of Boston Dynamics’ newest batch of nightmare fuel, as the company recently released a demo where Atlas climbs scaffolding with ease before pulling off an impressive spin move to highlight how it could be harnessed on a construction site.

If that video looks a little strange, it’s likely because the company did a fair amount of editing to firm up the showcase that revolves around a largely preprogrammed sequence (although Atlas has the ability to adjust to issues and compensate on the fly).

The future is going to be a very interesting place.