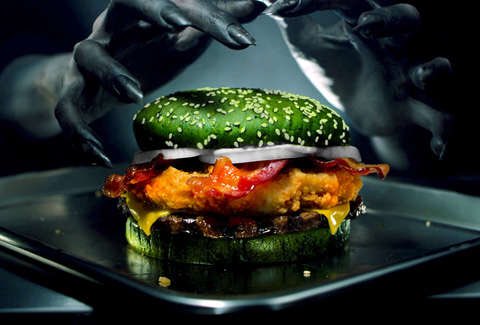 How’s this for a gimmick.

As a Halloween precursor, Burger King is rolling out what it dubs, The Nightmare King, which is made up of a quarter-pound of beef, a fried chicken fillet, thick bacon, mayo and onions, is served on a Frankenstein-monster-esque glazed green bun.

They could have stopped at the catchy name and green bun, but Burger King went extra extra.

The fast food chain ran a clinical sleep study on participants who ate The Nightmare King. Burger King teamed up with Florida Sleep & Neuro Diagnostic Services to monitor the sleeping patterns of 100 participants over 10 nights. Participants would eat the burger before they went to bed and their heart rate, brain activity and breath would be tracked by scientists to decipher whether or not the individuals had vivid dreams.

Burger King was able to stretch the science to market the conclusion that The Nightmare King actually causes nightmares.

Via Food and Wine:

“According to previous studies, 4% of the population experiences nightmares in any given night,” Dr. Jose Gabriel Medina, a specialized somnologist and the study’s lead doctor, said in a statement. “But, after eating the Nightmare King, the data obtained from the study indicated that the incidence of nightmares increased by 3.5 times.”

Dr. Medina went on to say that the unique combination of proteins and cheese in the Nightmare King led to “an interruption of the subjects’ REM (Rapid Eye Movement) cycles, during which we experience the majority of our dreams.”

Imagine having so many marketing dollars that you can corral a group of 100 people for 10 days and hire a team of professional scientists to prove that your product will fuck people up. Long live the Burger King.

The Nightmare King will be available October 22. May want to take the 23rd off from work.