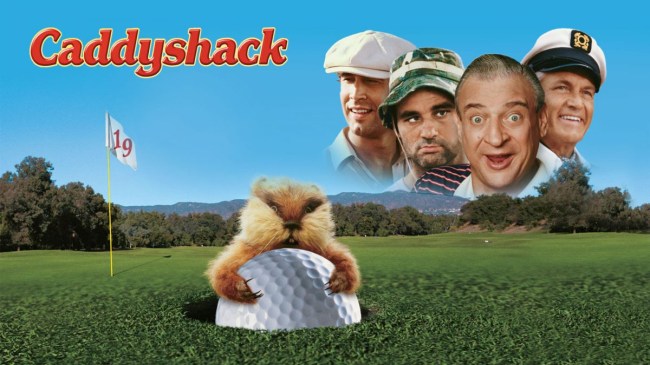 It’s been nearly three decades since Caddyshack graced the world with its genius, becoming one of the funniest sports comedies of all-time. In an excerpt from Chris Nashawaty’s new book, Caddyshack: The Making of a Hollywood Cinderella Story, Nashawaty details how borderline reckless the entire production was–from constant drug use to countless re-writes to a ‘fuck it, just improvise’ mentality, it’s amazing the movie ever got made.

The entire excerpt, can be read on Sports Illustrated, but the part I found laugh out loud funny was the ubiquitous drug use of the entire cast and crew, led by none other than Rodney Dangerfield.

“He comes in wearing this aqua-blue leisure suit and takes out a plastic bag and does two lines of coke. He undoes his shirt and says, ‘Where’s the pussy?’ ” It was a hell of a first impression. Dangerfield would end up getting $35,000 for his role. And though he would always credit Caddyshack for launching his movie career, he would often do so while complaining that he actually lost $150,000 on the film, having given up a month of headlining in Vegas to shoot it.

Ann Ryerson, who played one of the film’s caddies, said of the Caddyshack cast “you couldn’t find a more fun group to party with.”

“I had never seen cocaine before I got to the set of Caddyshack,” says Berkrot. But the sight of coke was hard to ignore. And as the shoot went on, recreational use that started by the gram turned into binges indulged by the ounce. It seemed to be the fuel that kept the film running.

“This was really good cocaine,” says Hamilton Mitchell, who played Motormouth, another caddy. “Pure, like they had just beaten it out of a leaf in Colombia and somebody had carried the leaf to us and turned it into powder in front of us just so we knew how pure it was.”

Cocaine was “driving everyone,” says O’Keefe, who calls his 11 weeks in Florida “a permanent party.” “It would be lunch and someone would say, ‘Do you want to do a line?’ ‘Yeah, sure!’ It was no big deal. This was the ’70s.”

Peter Berkrot, who played the wiseass caddie Angie D’Annunzio, offered another entertaining story about Dangerfield and the booger sugar:

“I’ll tell you a story about Rodney,” says Berkrot. “I had a tray with my weed, and I was walking through the hotel lobby and saw Rodney. He said, ‘I love weed. You know what I love more than weed? Coke.’ I thought he was doing a bit, but we found out he wasn’t.” Berkrot adds, half-jokingly: “The only person who didn’t take drugs on the movie was Ted Knight.”

Check out the entire excerpt here, it’s definitely worth a read.