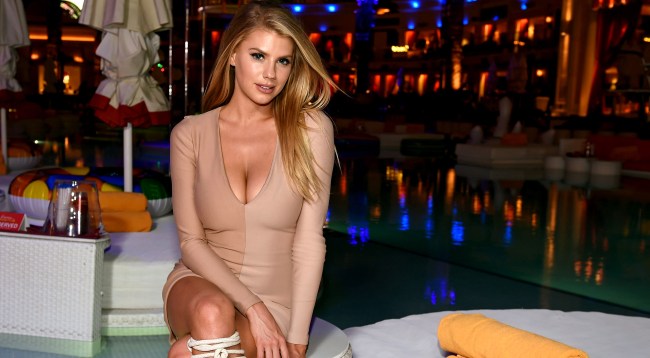 Yep, for at least one evening she was… sort of.

Appearing on Lights Out with David Spade on Comedy Central, McKinney took part in a segment called “Secret Stand-Up” where Spade, and in this case, Whitney Cummings, take a non-comedian, put them on stage with an earpiece, and feed them jokes to tell the audience.

McKinney did her set on the well-trod stage of The Comedy Store, and the Joe Dirt 2 actress did pretty well. The jokes themselves weren’t exactly spectacular, but McKinney did a pretty decent job of delivering them considering she had to connect with the audience while trying to listen to Spade and Cummings in her ear telling her what to say next.

McKinney got one of her bigger laughs when she joked, thanks to Cummings, “I just want what every woman wants. A 90-year-old billionaire with an incurable disease.”

Which led to some interaction between her and an old guy in the front row who informed her that he is 95, to which she replied, “You’re way too young for me. I’m sorry.”

Her best joke of the set was probably when she started out with one of the oldest and lamest jokes in the book.

“I just flew in from Cancun, and, boy, are my arms tired,” said McKinney, surely wondering where this was headed. “From jerking off a billionaire on the jet,” Spade told her to say, and she did, while almost cracking up.