Cheerleader Mom Accused Of Using Deepfakes To Harass Other Cheerleaders 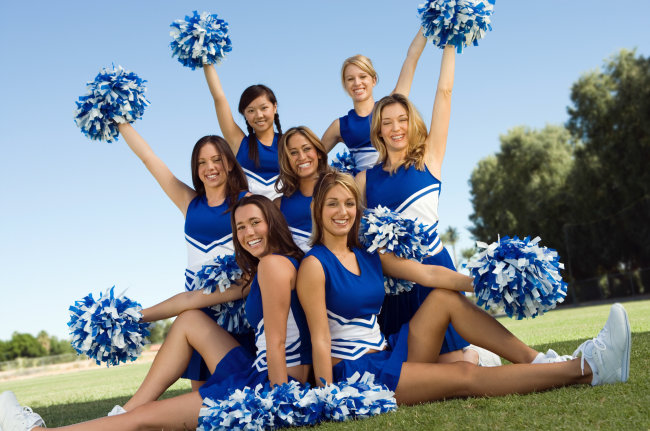 It’s early, but a cheerleader mom in rural Pennsylvania might be the frontrunner for 2021’s worst person of the year award:

Three teenagers, members of a cheerleading program in Bucks County, Pa., received a series of harassing text messages over the course of last summer. So did their parents and the owners of the gym where they practiced.

Some of the anonymous messages contained doctored images and videos that attempted to incriminate the teenagers with fake depictions showing some of themnude, drinking alcohol or vaping. At times, the text messages took an even darker turn, telling at least one girl to die by suicide.

On March 4, the mother of another teenager in the cheerleading program was arrested and charged with sending the messages, apparently using deepfake technology to add likenesses of the girls to incriminating images, law enforcement officials said.

Deepfake technology is one of those internet buzzwords that has really picked up steam in recent months. There were a slew of Tom Cruise TikTok deepfakes that made the rounds, unsettling everyone with their accuracy but also, you know, Tom Cruise:

From there, computer experts started warning us of a coming age where deepfake technology would be misappropriated for criminal use. But it’s hard to make the jump from lighthearted Tom Cruise lampooning to sinister, criminal applications.

Enter Raffaela Spone, a mom in Buck’s County, PA, a mother who clearly doesn’t want other cheerleaders taking mat space from her own cheerleading daughter.

Raffaela Marie Spone fr Penn. Woman created ‘deepfakes’ of girls in daughter’s cheerleading squad to harass them, force them off team: police. After searching her phone, investigators found Spone also sent the messages to the victims, urging them to kill themselves, Bucks County. pic.twitter.com/PDeHcdkgDY

If you think that’s a harsh comparison, think about this: Spone spent what I presume to be hours, if not days, conjuring deepfake nudes of underage girls. She then texted them to a girl for a MONTH from an anonymous number and told her to kill herself. THEN, cherry on top, she sent doctored deepfakes to her cheerleading coaches of the girl vaping:

Later that day, Madi Hine approached her mother crying hysterically about the harassing texts, her mother said. Her daughter admitted that she was embarrassed, and told her that she had been receiving anonymous text messages depicting her naked or telling her to die by suicide for a month before the gym’s owners received anything.

If I learned anything from Netflix’s spectacular docuseries Cheer (from the Last Chance U filmmakers), it’s that cheerleaders are the most stressed out athletes perhaps of any sport. It is a DRAMATIC sport. To think that a 17-year-old was trying to go about her life—train for cheerleading, homework, college application stuff, standardized test prep, etc.—while receiving a month’s worth of nudes featuring her own face from some anonymous number, and keeping it all quiet, is heartbreaking. Good lord, I got into a fender bender when I was a 17-year-old on the way home from school and I remember the crippling anxiety I had about telling my parents at the dinner table. I couldn’t even swallow my mashed potatoes, and mashed potatoes are a food made for kids who just had their wisdom teeth removed. “Swallowable” might be what mashed potatoes are most known for.

Point is, to call this “cyberbullying” feels like the understatement of the decade. This feels closer to online terrorism, especially coming from a 50-year-old mother? What the hell are you doing lady? You deserve years in jail, IMO.

If this is where we’re headed, God help us. In short order, it will be impossible to know what pictures are real and what are fake, and competitive moms are utilizing the technology to take out their daughters’ cheerleading competition. I am officially terrified of our Deepfake future.