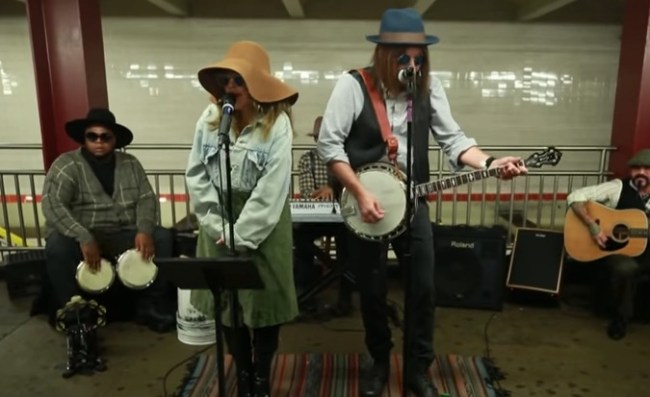 This isn’t the first time Jimmy Fallon has convinced a high-profile celebrity guest to go busking with him in the subway and based on how successfully he pulled off this latest stunt I’ll assume it won’t be his last.

Jimmy got Christina Aguilera, one of the most recognizable singers worldwide, to dress up in costume with him and go busking (play music for donations) in the NYC subway and her flawless voice brought in quite the crowd. After the first song, Jimmy ripped off his costume and told the crowd who they were but if we’re being honest I kind of got the sense that a few people in the crowd already knew what was up based on the crowd reactions. I’ve never seen any crowd this into busking before, but then again I’ve never seen Christina Aguilera perform Aretha Franklin’s ‘Think’ down in the subway before:

For what it’s worth, this is the second time (that I recall) in which Jimmy Fallon has disguised himself in the NYC subway and gone busking. The last time I remember him doing this was with Maroon 5.

I can’t say that I ever had much time for buskers. There’s something about standing in a crowd down in the subway to watch a musician perform that doesn’t sit right with me. It’s already crowded enough in the subways, and you’re always hauling ass from one train to the next or on to your next destination. The idea of stopping to smell the roses (listen to music) down in that musty old claptrap of a subway system just seems wrong, but then again I’d have missed this performance with that attitude.