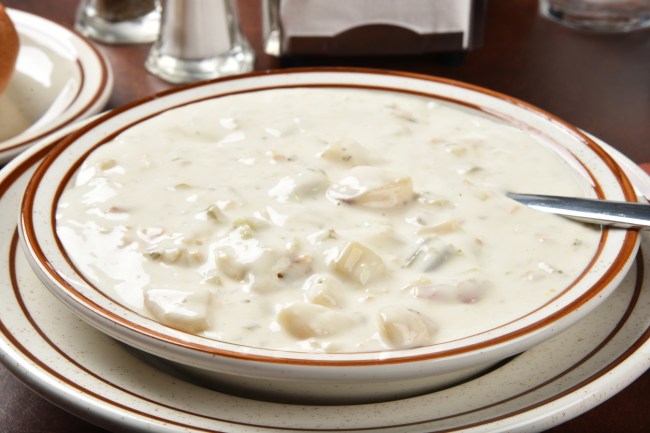 I’ve stumbled across a number of crimes against food during my time on the internet and have come across countless culinary abominations that made me suppress the urge to vomit in my mouth a little bit.

I’m personally not a fan of putting pineapple on pizza, but even if you are, I think we can all put our differences aside and agree strawberries have no place on one.

That may be bad but it has nothing on the person who decided candy canes would make a suitable topping.

Of course, I’d be remiss if I didn’t mention the cotton candy hot dog that a minor league baseball team decided to unleash upon the world.

It’s Sugar Rush night at UPMC Park! You can get a Smith’s hot dog with a cotton candy bun topped with nerds! 🤪🤪🤪🤪🤪🤪 pic.twitter.com/z9FhZBtXun

Burn it. Burn it all to the fucking ground.

However, I don’t know if any of the aforementioned atrocities top the one that recently started to make the rounds online: a popsicle made of clam chowder.

"My friend made it. I have no idea why she did it."

Every day we stray further away from God.

The popsicle in question was posted on the Boston subreddit earlier this week and it’s safe to say people are not having it.

I bet if you take this clam chowder popsicle, and sandwich it between a St. Louis cut bagel, and threw it all in the trash, that it would be great. https://t.co/tCYWWQKuGK

You: retweeting that clam chowder popsicle
Me: pic.twitter.com/UdfrpCwJSX

I’m going to kindly ask that folks refrain from tweeting the clam chowder popsicle into their timelines. just a favor for me. think of me before you do that.

Based on the framing and quality of the picture, there’s a very good chance this is just a publicity stunt by Campbell’s but I’ve never wanted to buy clam chowder less in my entire life so I’m not sure how successful it’s going to be.