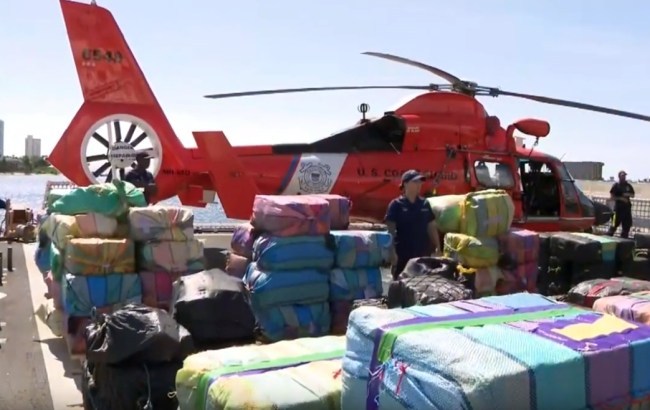 The U.S. Coast Guard seized approximately 26,000 pounds of cocaine and 1,500 pounds of marijuana during their three-month-long multi-agency operation off the coasts of Mexico and Central and South America. The Coast Guard worked alongside Royal Canadian Navy ships in international waters to make the massive drug busts where they sailed nearly 10,000 miles. They also confiscated contraband that included a cache of “illegal weapons” in an Ecuadorian fishing boat that was considered “evidence of nefarious activity.”

The United States Coast Guard website broke down the seizures:

The Coast Guard unloaded the huge confiscation of drugs at Port Everglades in Fort Lauderdale. The drugs were so very close to South Beach where they would have been thoroughly enjoyed.

“The crew of Hamilton has shown the utmost commitment and dedication to the Coast Guard and to the United States over the course of the last three months,” said Capt. Mark Gordon, commanding officer of the cutter Hamilton. “It is incredibly difficult for our crew to be separated from family and loved ones for such an extended period of time, but their perseverance and enthusiasm to conducting this mission was fundamental to our success. Without their determination these criminal organizations would continue to spread fear and violence throughout the Americas.”

“$350 million of street value that’s not going to go to some of the most violent criminals in the world in this hemisphere do let me just say thank you first to the team of Hamilton,” said Acting Secretary of Homeland Security Kevin McAleenan.

Keep South Beach in your thought and prayers tonight, it will be a struggle for the immediate future with rising drug prices.

Tune in to our @USCGSoutheast Facebook page at 10 a.m. to see our live stream of the drug offload press briefing taking place at Port Everglades. pic.twitter.com/whjOPqITk5

RELATED: Coast Guard Sets Record By Seizing 455,000 Pounds Of Cocaine Worth Over $6 Billion This Year