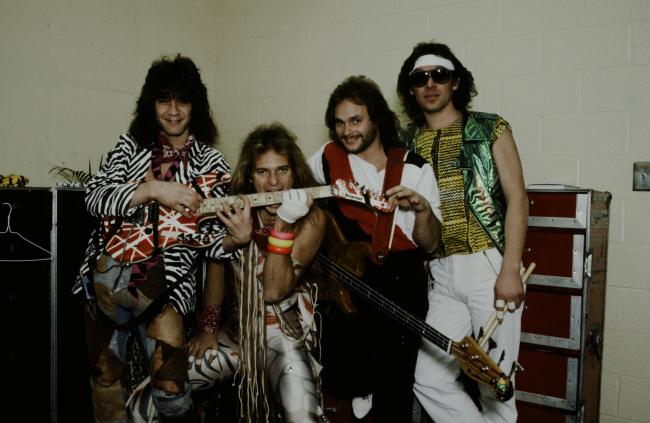 Kurt Jefferis was just a 20-year-old department store clerk in 1984 who evidently had access to a magic genie, as he was selected from 1 million rock-and-roll hopefuls for MTV’s contest “Lost Weekend With Van Halen.”

According to a new piece by Vulture documenting the experience, one of Jeffries 13 postcard submissions was selected in the sea of submissions, and after MTV VJ Martha Quinn read his name on the air, propositions to be his +1 flooded in: women willing to trade sexual favors, thousands of dollars in cash, a motorcycle, a new wardrobe, a trip around the world.

Jefferis opted not to take his girlfriend (“She said, ‘Are you going to take me?’ And I just laughed or something”), instead enlisting his best friend, Winnick, then 19.

On April 4, 1984, the two boarded a seven-seat Lear private jet at the Philadelphia International Airport en route to Detroit’s  Cobo Arena, a 12,000-seat sports arena where Van Halen would be playing for two consecutive nights.

It's a two @tvguidance counselor week! I've always been fascinated by MTV's 1984 "Van Halen Lost Weekend" contest, so I tracked down the guy who won it, Kurt Jefferis and chatted about it
iTunes: https://t.co/x2hIImttuI
and https://t.co/uqdNZ7n0FN pic.twitter.com/bXdOZU9Tml

If you have the time, the entire Vulture piece is pretty fascinating, but here are the details that demand repeating.

In secure cloisters within the bowels of the coliseum, Jefferis and Winnick discovered a lavish spread that included lobster, filet mignon, and bowls of M&M’s from which all the brown candies had been removed per Van Halen’s notorious tour rider (any violation of which reliably resulted in trashed dressing rooms). There was also no shortage of young women — the “spandex queens,” as the group’s road crew called them. “The band wouldn’t normally do anything like this,” says Weiss, whose bestselling book The Decade That Rocked chronicles a Who’s Who of ‘80s rock royalty. “Usually, the only people let backstage were girls. It was rare that they would even let guys in. But it was a free-for-all that weekend. I think the band tried to make it seem more like a mainstream party with guys and girls for MTV.”

On Van Halen’s rider, they had dressing room requests which included a tube of KY Jelly and no brown M&M’s.

If the group saw brown M&M’s in the dressing room, they knew the promoter likely didn’t read the contract and worried about other parts of the show like sound & lighting. pic.twitter.com/0gY25llD6j

At some point, a folded magazine page containing a pile of cocaine made its way onto the table. “[Roth] had a coke nail on his pinky finger and [took] a little scoop,” Winnick says. And did Roth’s pinkie make its way toward Jefferis’s nostril? “Yep.”

More bourbon. More beer. Vodka. Blue Nun. Schlitz Malt Liquor. More fatties. Over its years as a touring act, Van Halen had refined, down to a science, a system of recruiting potential sexual partners for the evening. Roadies were issued color-coded backstage passes that allowed band members to track which employees were responsible for a given night’s sexual conquest — or conquests — a kind of quality control that was rewarded with cash and/or gifts by Roth, Anthony, and the Van Halen brothers. As the backstage partying ground on, the singer made a fateful proclamation: “I think Kurt needs Tammy.” At the time, Tammy was one of the Motor City’s most infamous groupies and apparently had come to know Van Halen from previous visits. According to MTV executives and the contest winner, she performed a striptease to a few disco and funk songs before giving Jefferis a private audience. “She strips down for me. And then Dave tells her to take me in the shower for a while,” he remembers … but that’s about it.

MTV network executive Richard Schenkman claims the contest winners rubbed egg salad all over Tammy in an act of drunken bizarre endearment: “I could hear him howling from where I was sitting.”

Jeffries, now a facilities manager at a school has been sober for more than 30 years, seems content that the two-day bender was enough for a lifetime.

“I felt larger than life for a while,” Jefferis says. “I mean, dude. I smoked a fatty with David Lee Roth.”