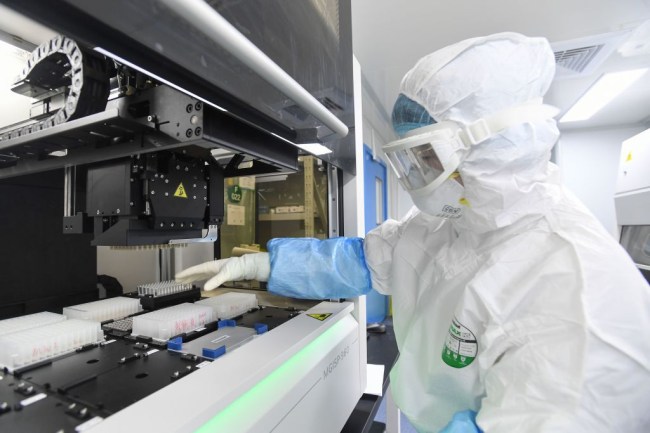 There has been an underlying conspiracy theory suggesting that the origin of the deadly coronavirus was from a virology lab in Wuhan. That was previously speculation, but now Chinese scientists have released new findings that link the laboratory in Wuhan and COVID-19.

The latest coronavirus update found that the death toll is now at 1,770, and there are another 70,548 confirmed cases of the respiratory disease in mainland China according to the country’s National Health Commission. More than 780 million people, nearly half of China’s population, are currently living under various forms of travel restrictions.

The coronavirus is believed to have originated from the Huanan Seafood Wholesale Market in Wuhan, China. The food market sells a wide variety of animals, including bats, which is one of the most common carriers of the COVID-19. The coronavirus is a zoonotic disease, which means it can be transmitted from animals to humans.

However, the new report states that the lethal respiratory disease was more likely to start in a laboratory instead of the market. The South China University of Technology released a new paper on the origins of the coronavirus, and concluded that the disease was probably created by the Wuhan Center for Disease Control (WCDC) and the Wuhan Institute of Virology.

The Wuhan Center for Disease Control is located only 900 feet from the Huanan Seafood Wholesale Market, and is near the local hospital. “The WHCDC was also adjacent to the Union Hospital where the first group of doctors were infected during this epidemic,” the paper read. Liu Zhiming, the director of Wuchang Hospital in Wuhan, died on Monday from the coronavirus.

The Wuhan National Biosafety Laboratory of the Chinese Academy of Sciences is China’s first and only Biosafety Level 4 “super laboratory,” that studies “the most dangerous pathogens.” Laboratories that handle pathogens receive a rating of 1 to 4, according to Live Science. A level 1 is the lowest risk, and a Biosafety Level 4 (BSL-4) is the highest risk.

In a paper titled “The possible origins of 2019-nCoV coronavirus,” Chinese researchers explained why they believed the deadly disease originated from a lab in Wuhan. The paper, written by Botao Xiao and Lei Xiao, noted that the WCDC houses disease-ridden animals, including 605 bats.

The paper found that the “genome sequences from patients were 96% or 89% identical to the Bat CoV ZC45 coronavirus originally found in Rhinolophus affinis (intermediate horseshoe bat).” The closest population of these bats living in the wild is in the Zhejiang province, which is 600 miles away.

“This laboratory reported that the Chinese horseshoe bats were natural reservoirs for the severe acute respiratory syndrome coronavirus (SARS-CoV) which caused the 2002-3 pandemic,” according to the report.

According to the paper, a researcher at the WHCDC allegedly quarantining himself for two weeks after the blood of one of the bats in the lab dripped on his hand. The same scientist quarantined himself after one of the infected bats urinated on him.

The same researcher discovered a tick on a bat, and ticks can spread diseases from one host to another.

“It is plausible that the virus leaked around, and some of them contaminated the initial patients in this epidemic, though solid proofs are needed in a future study,” the report said.

“The principal investigator participated in a project which generated a chimeric virus using the SARS-CoV reverse genetics system, and reported the potential for human emergence 10,” the report says according to Daily Mail. “A direct speculation was that SARS-CoV or its derivative might leak from the laboratory.”

Researchers have discovered over 500 new coronaviruses in bats over the last 10 years.

“So there’s a clear and present danger from our contact with wildlife,” disease ecologist and president of EcoHealth Alliance, Peter Daszak, told WBUR. “And if that contact is expanding and especially through things like the wildlife trade, it’s bringing us at risk of these pandemics for sure.”

There are also reports that claim the coronavirus may have jumped from animals to humans from contact with pangolins, which are one of the world’s most-trafficked animals.

“We don’t know where it originated, and we have to get to the bottom of that,” Cotton said on Fox News’ Sunday Morning Futures. “We also know that just a few miles away from that food market is China’s only biosafety level 4 super laboratory that researches human infectious diseases.”

“Now, we don’t have evidence that this disease originated there, but because of China’s duplicity and dishonesty from the beginning, we need to at least ask the question to see what the evidence says,” Cotton added. “And China right now is not giving any evidence on that question at all.”

And given Chinese dishonesty and lack of transparency, we have to consider all possibilities until the evidence is in. But sure @jotted, you take the Chinese Communist Party line at face value.

Communist China has censored its citizens in the past, and covered up the extent of how bad the severe acute respiratory syndrome coronavirus (SARS) outbreak was in 2003.

Chinese President Xi Jinping published a timeline of his actions to combat the coronavirus on Sunday, but it revealed that he knew about the COVID-2019 outbreak two weeks before he acknowledged it publicly.

“I issued demands during a Politburo Standing Committee meeting on January 7 for work to contain the outbreak,” Xi said. “On January 20, I gave special instructions about the work to prevent and control the outbreak.”

“Certain laboratories in the institute have probably been engaged, in terms of research and development, in Chinese [biological weapons], at least collaterally, yet not as a principal facility of the Chinese BW alignment,” Shoham told The Washington Times.

A 2006 report from the U.S. Department of State stated that “China maintains some elements of an offensive BW capability in violation of its BWC obligations.”

Professor Richard H. Ebright, the laboratory director at the Waksman Institute of Microbiology and a professor of chemistry and chemical biology at Rutgers University, has gone on the record to say that the coronavirus is not a genetically-engineered disease.