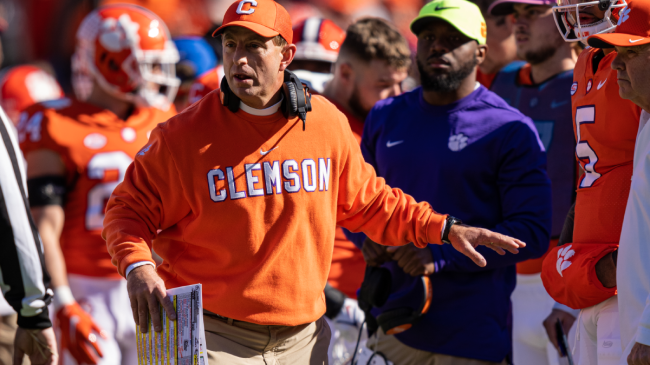 Dabo Swinney has never been one to hold back when talking about the state of college athletics. He’s been heard giving hot takes on ranking systems, rivals, the College Football Playoff, recruiting, the transfer portal, NIL, and pretty much anything else that revolves around the sport and team that he coaches.

He certainly likes to hear himself talk, going on long winded rants at every opportunity possible to talk about the disrespect his Clemson Tigers see from the media year after year. But often, his words are misconstrued.

For example, his statements on NIL. Many like to reference the ‘I’d quit if players ever got paid’ quote, which was taken out a bit out of context. Swinney’s actual statement was this:

“We try to teach our guys, use football to create the opportunities, take advantage of the platform and the brand and the marketing you have available to you. But as far as paying players, professionalizing college athletics, that’s where you lose me. I’ll go do something else, because there’s enough entitlement in this world as it is.”

He was referencing schools paying for play, not NIL, though right now those two might seem interchangeable (looking at you, Texas A&M). Swinney’s words reference using your platform as a player to increase brand and marketing opportunities. That’s exactly the point of NIL, and many programs are using it to their advantage, in the right way.

Dabo’s original comments alluded more to the current chaos in a college football landscape that’s changing more than ever before.  That chaos, according to Swinney, is still prevalent today, but he seems to be inviting the turmoil as opposed to fighting it.

Swinney appeared on the Rich Eisen Show shortly after the news broke of his $115M contract extension. Dabo talked about where he sees college football heading over the next five to ten years, doubling down on a few comments made about the sport being in a state of current chaos.

“It’s a crazy time right now in college athletics, a lot of change, a lot of unknowns. I do think things are headed in a good direction. I think the popularity of the sport’s never been better. I think there’s certainly some type of major change coming structurally sooner than later when it comes to governing structure, how the Power Five is organized. We’ve got expansion coming. There’s a lot of moving parts… There are always unintended consequences from good changes that come about but I think we’re headed in a good direction, and honestly, the more chaos the better because it’ll get us there sooner than later.”

Eisen then asked him about his views, which he hints might’ve changed since the last time the two spoke. The radio host noted that Swinney had previously said the sport was headed for a “complete blowup” when talking about the transfer portal and tampering, indicating concerns that the college football was going in the wrong direction. He asked if the coach had changed his stance on those subject matters.

Swinney had the following to say.

“No, no. We still have chaos. I just think it’s ultimately going to lead us where we’re going, and that’s a restructuring of college football. I think college football needs that… The transfer portal is great, but there are a lot of unintended consequences that come with it. There is tampering, young people being manipulated… But the good from it far outweighs the bad. I think it’ll all settle out. It’s chaotic now, for sure… But I do think that ultimately is going to drive us to a better place.”

Swinney certainly sees the fluidity of college football, and in particular, the Power Five governance. He believes, though, that once the chaos settles from all of these drastic changes, the sport will ultimately improve.