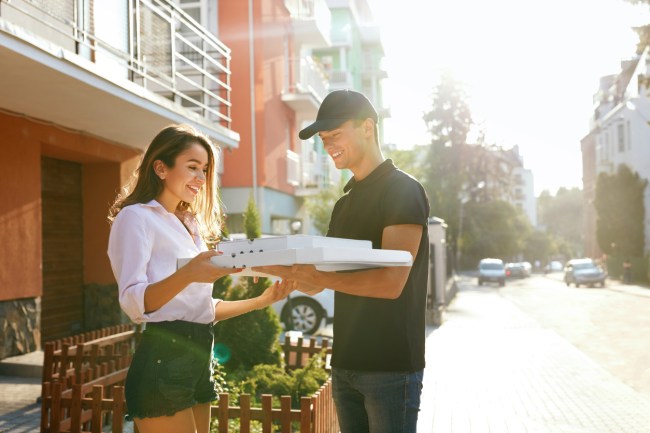 When you order food from your super convenient food delivery apps do you feel that you’re missing some fries or short one mozzarella stick? You might not be imagining it because delivery drivers are eating your food according to a new survey. That’s right, someone’s grubby fingers are digging in your bag of garlic knots and stealing one for themselves.

A survey conducted by US Foods, a leading foodservice distributor, found that nearly a third of delivery drivers were taking customers’ food.

The survey questioned 1,518 American adults between May 9-13, 2019. Of the respondents, 500 people were delivery drivers. The survey found that Americans get food delivered about three times a month. The most popular food delivery apps were Uber Eats, Grubhub, DoorDash and Postmates. On average, 40 minutes was the longest time people were willing to wait for food to be delivered.

RELATED: The New Dating Habit Is The ‘Foodie Call’ Where One-Third Of Women Only Date Men Because They Want Free Food

The top complaints by customers were food was not warm/fresh (17%), food delivered late (16%) and incorrect orders (12%). The top complaints of drivers was a weak tip or no tip at all (60%), food not ready in time at the restaurant (52%) and unclear instructions by the customer in the app (39%).

Then came the food stealing. There were 21% of the customers who suspected that their driver stole some of their food. It turns out that the customers are underestimating the hungriness of their delivery people. Of the delivery drivers questioned, 28% admitted that they had eaten the customer’s food at least once and 54% said they were tempted to snack on the food they’re supposed to deliver.

That’s 28% who admitted to eating customers’ food. You know that number is higher. Imagine starving and having to drive around with delicious smelling food? How could you not steal a French fry or garlic knot? And who’s to say that the driver doesn’t get parched during their deliveries, so they take a swig of your soda?

RELATED: Restaurant Goes Viral With ‘My Girlfriend Is Not Hungry’ Menu And It Should Mandatory At Every Food Establishment

US Foods asked consumers: “If you ordered a burger and fries, and the deliverer grabbed a few fries along the way, how upset would you be?” Out of a scale of 1 (not a big deal) to 10 (absolutely unacceptable), the average response was 8.4.

In March, a DoorDash delivery guy was caught on video sipping a Cold Stone milkshake while at the front door of the customer. A security camera caught the moment the delivery dude took a hearty sip of the milkshake.

It’s 2019, why isn’t there a tamper-proof holder for my food that only opens when my phone scans the container? I’d be happy to pay a little extra so that nobody steals my mozzarella sticks.