Is A 4:30PM Dinner Reservation Too Early For Your Girlfriend’s Birthday? 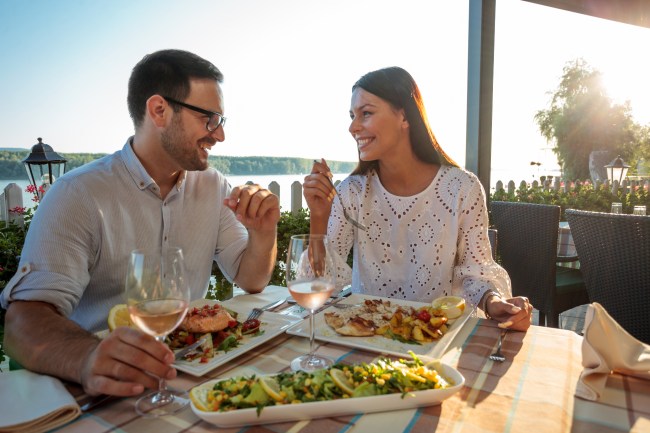 It’s m’lady’s birthday, and I’m going all out. The whole nine yards, no punches pulled, no expense spared. A grandiose affair that will be talked about for ages hence. Other couples will see our instagram stories and break up, realizing they’re not truly happy, not truly committed. Girlfriends will weep at their boyfriend’s inferior efforts; boyfriends will weep that they can’t live up to my shining example. This birthday date will ruin fucking lives.

What’s on the plate for the evening? Why, dinner of course. We’ll start the evening with dinner at an extremely pricey, hard-to-reserve Italian restaurant in Manhattan. I won’t say the name just in case she reads this (she won’t, she hates my work). But let’s just say it’s referenced in a Drake song. That should tell you just how expensive it is, and how unlikely it is that you’ll ever eat there.

Most people like to eat at 7:30 or 8 in New York City. That’s called “prime time,” like Deion Sanders. Reservations become available for this restaurant at 10AM two days in advance. I hopped on to the reservation portal at 10:02, and the only time left was 4:30PM. You bet I grabbed it! I didn’t spend the last three years losing out on the SNKRs app to not be prepared for some clunky reservation portal. The tides have turned. Quick draw McGraw, they call me.

This is where things start to get tricky though. I’ll have to sell my girlfriend on the idea that 4:30PM was an intentional reservation choice. That somehow, I want us to eat dinner when everyone else is deciding whether they have the energy to go to the gym; when after-school programs are handing out goldfish and high schoolers are strapping on their shinguards for soccer practice. A full 2 hours and 19 minutes before sunset in late September. If it were Sunday, you might call it a late brunch. I won’t go that route though; no chance she buys the idea that I planned a late birthday brunch on a Thursday.

I sent an email to the restaurant, pleading with them to give us a better time. I told them it was her birthday and everything. I even said that growing up, she never had birthdays because her family didn’t believe in them. I made up this whole story about her devout Amish parents and their distaste for conventional celebrations, saying that she recently escaped from the confines of humble clothing and candle lighting to experience the wonders of the modern world. This is her first birthday celebration ever, and we need to make it special. The last thing she needs is a 4:30PM dinner that will surely remind her of the suppressive life she left behind. I even requested that they remove all candles from our table, as those are a trigger to her past.

I haven’t heard back from them, so we’re going to assume that 4:30 is our time to dine. How does one prepare for a 4:30 dinner? First, you have to wake up extra early. I set my alarm for 5AM and roused her from her slumber with a shout. “WAKE UP! BIG DAY!” She was confused, since the reservation is still a surprise. I explained that we were going for a jog to get the blood pumping, but really, it’s to make us more hungry. I’ve planned the entire day to ensure maximum hungriness by 4:30PM. Because let’s be honest: nobody is hungry at 4:30PM unless they haven’t eaten anything all day.

Which brings me to my next initiative: no food all day. I emptied the cupboards and the refrigerator and removed all the cash and credit cards from her wallet. There is nothing edible in the house and no way for her to go out to buy food. You’re probably wondering… how will she split the big birthday dinner bill? Ha! I’ve decided to pay it myself. When it’s your girlfriend’s first birthday since leaving the village, you treat her. Wait until she sees their indoor-flush toilets!

I feel decent about pulling this off. In Spain, they eat dinner at midnight and it’s considered trendy. This is the exact opposite of that. And Spain isn’t doing that well with COVID, right? So being the opposite of them seems like a good thing these days.

Happy birthday my love. Going to bed by 8 will feel so good after this meal.