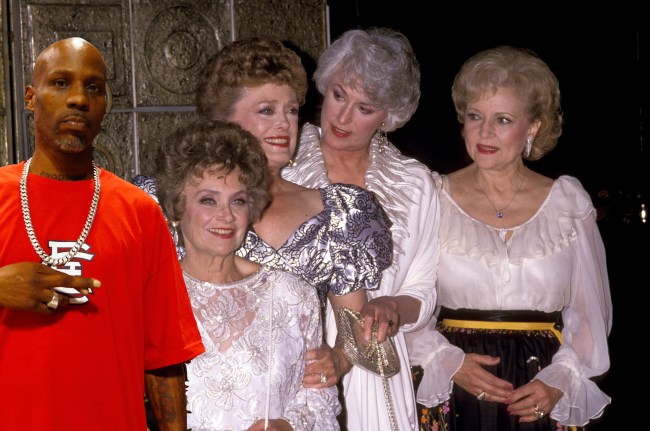 The image of DMX sipping a Heineken and howling over Rose Nylund’s latest pickle as three Rottweilers stare at him, bewildered, is why we should never assume we know someone we’ve never met.

If you asked me before today where Golden Girls re-runs ranked on DMX’s list of cherished hobbies, I’d probably guess right below quilting and embroidery.

That was before I stumbled upon this 2017 First We Feast clip of Gabrielle Union detailing her experience with the rapper on the set of Cradle 2 The Grave (2002).

Who knew DMX was a Golden Girls stan? 😂@ItsGabrielleU told @SeanSeaEvans all about it on last week's #HotOnes https://t.co/gSo8bLaAN5 pic.twitter.com/ZqNjY7bqxp

“Did you know that DMX loves the Golden Girls? That’s a real fun fact. He watches it in his trailer.

And he’d be like *extreme DMX voice* ‘Have a drink! Let’s watch The Golden Girls! This shit is funny!’

We would have a Heineken, and sometimes a little Crown, and we’d watch The Golden Girls, and he’d laugh hysterically.”

Following his tragic passing, Gabrielle Union reminisced about the days in his trailer sipping on cold beers and watching TV Guide’s 54th ranked sitcom in its list of the 60 Best Series of All Time.

DMX’s alpha image didn’t produce much public interest in his softer side, but in the wake of his death, people have begun sharing clips of DMX being Earl Simmons.

In DMX’s honor, treat someone like an orchid today🌷 pic.twitter.com/J2UDVBJzNT

This DMX Daddy-daughter moment in an amusement park really touches my heart. #RIPDMXpic.twitter.com/3E2KMtIhac

Rest in peace to a forever legend.